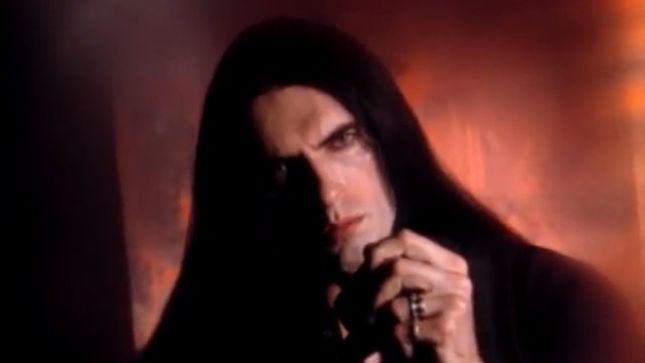 In a new interview with music writer Joel Gausten, former Type O Negative / Life of Agony drummer Sal Abruscato discusses his new album with A Pale Horse Named Death (When the World Becomes Undone), his introduction to the music scene via the early days of Carnivore, and the enduring legacy of his late friend, Peter Steele. An excerpt from the chat appears below:

Joel: If I have your history right, you started playing guitar during the Type O era, and it was actually Peter who got you into that.

Sal: "Yeah, totally. First of all, this goes back to 1983. I met Peter then because I started taking drum lessons from Louie Beato, the drummer in Carnivore. He was nine years older than me, and so was Peter. I was still a little kid when they were like 19 or 21. Louie took me under his wing like I was his little brother. He started taking me to Carnivore rehearsals. At that time, (guitarist) Keith Alexander was in the band, and they were rehearsing in Peter’s basement. Peter took a liking to me, like I was the little guy who hung out with them. I was just like, ‘Wow, man! This guy is amazing!’ He just was already an amazing musician back then. You just saw the theory, the talent. When I was in Type O, he made me such a good musician. He made me such a good drummer just by working with him. He would write a lot of the Type O songs on guitar. He was originally a guitarist before he was a bassist. Back in the (pre-Carnivore band) Fallout days, he was playing guitar at first, then they needed a bassist and he switched over. It was all unintentional back then. He never wanted to be a singer, and then they couldn’t find a singer and he started singing.

He was a huge influence; I loved the way he played and the way he wrote things, and I kept on absorbing. In like ’90, I bought a bass and started playing on bass first. Then, I bought a guitar and started playing that. Even though I was becoming an accomplished drummer where I had already done (the first Type O Negative album) Slow, Deep and Hard and we were getting ready to do the other stuff, I was at home jamming on my shit – just playing guitar. That’s how it started. In the mid ’90s, I got a four-track and started recording. I start pushing myself to learn how to write songs. I knew that one of the most important things aside from knowing the instrument was to develop the ear and learn how to piece together and orchestrate music. In the early days, I would stay through the whole studio session. It wasn’t like I’d do my drums and leave and not come back. I would stay until the record was done, and I would watch how (Type O Negative keyboardist) Josh Silver and Peter worked and orchestrated things. I would watch how Peter would come in the next morning with crazy ideas. Not only was he a friend from the neighborhood, but he was a mentor musically to me.

But then I quit the band. I was frustrated; I was also young. I was 23 and a half. When I recorded Bloody Kisses, I was still 22 turning 23. You can imagine when you’re at that age; you’re young, dumb and full of you-know-what. You think you’re a hotshot and you know it all. We would butt heads a lot. I wanted to tour a lot, and Peter was very scared to make the jump. I got really frustrated. That same year, I did River Runs Red for Life Of Agony. They had a lot of touring ahead of them. At that age, I just wanted to leave town; I wanted to go on the road and get that experience. I did two tours with Type O, but it seemed to put a sour taste in Peter’s mouth. So, I left. But I still came in and out, watched him and watched what he did. I still listened to and absorbed what he was doing. I also started focusing on other writers, like Paul McCartney, John Lennon, Geezer Butler and Tony Iommi. I just started analyzing and dissecting their stuff in my mind. It was a self-taught kind of thing; aside from reading drum music, I’m not really fluent with sheet music. It’s all in my head; it’s all natural."

Joel: Recently, there was a vinyl reissue of Bloody Kisses for the 25th anniversary. A couple of years before that, there was the big vinyl box set. It seems that every time Type O gets something re-released, people get excited. People truly still love that band. Every band wants to write that song or that record that will still mean the world to somebody 25 years later – and Type O did that. When you look back now – particularly during the Bloody Kisses era – why do you think it still resonates? What was that magical formula that you guys had that enabled you to create this stuff to where it’s 2019 and we’re still talking about it?

Sal: "You know, Peter was a prolific writer and visionary. If you listen to Bloody Kisses, it’s very much arranged just like Sgt. Pepper’s. A very conceptual, deep, Pink Floyd, Beatles kind of mentality and approach. The sitar…we did a lot of hidden nuances, which is something I try to do to this day. Those are the kind of records that, every time you listen to it – even 20 years later – you’re going to hear something that you didn’t hear before if you listen carefully. There are a lot of little things that go on very quietly – little nuances, little whispers and things. Then, the material…there was a lot of the New Wave-type of Goth stuff going on, but there was no one combining that Goth vibe with the Black Sabbath and The Beatles and then having that deep voice. The songwriting was stellar. Peter was just winging it and just doing what he felt, but his vision and cohesiveness were just so great. Keep in mind that Peter was heavily influenced by a lot of ’60s-type of music. He was big fan of all that stuff, and he was excellent at rehashing and recreating those similar amazing feelings you would get from those songs from back then. We did ‘Summer Breeze,’ ‘Hey Joe.’ He loved doing covers, but he also loved taking music and reinventing it. He had such a great knack at it.

There aren’t many great songwriters. I feel bad these days…we’ve lost so many great people. We lost Peter, we lost David Bowie, we lost Prince. I say to myself, ‘Jesus, these amazing songwriters are passing away.’ There’s no one stepping up to the plate who has that kind of talent and is so prolific. There isn’t anyone who is such an amazing songwriter and is so prolific they can do 30 albums and every one is fucking great. Peter had that gift to be able to do that – although I think that after October Rust (1996) and World Coming Down (1999), things were starting to sound a little bit the same to me. But he knew what it took; he knew those formulas."

A Pale Horse Named Death released their third studio album, When The World Becomes Undone, on January 18th via Long Branch Records; an imprint of SPV. A full album stream can be found below.

When The World Becomes Undone can be ordered here.