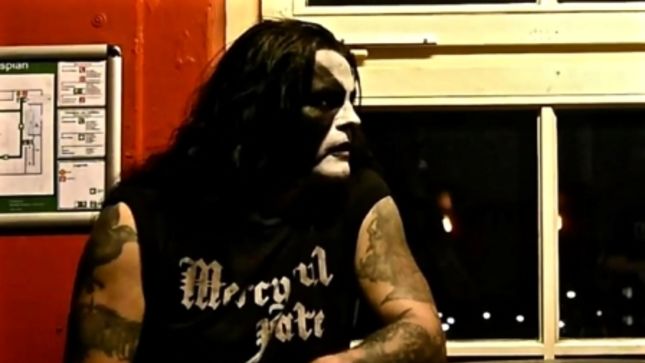 DCHeavyMetal.com recently spoke with former Immortal frontman Abbath in anticipation of the upcoming North American tour and the band's self-titled album. An excerpt from the interview transcript is available below along with the full audio.

Q: What made you decide to go in the direction of black metal instead of a more death metal sound which was definitely more popular in the underground at that time?

Abbath: "No I never, I never follow what’s popular. I just do what I like. If I wanna do a fucking pop album I’ll do a fucking pop album. That’s simple as that. If I want to do a disco album I’ll do a fucking disco album, it’s as simple as that. I don’t care what’s popular or not out there. I just follow my gut feeling and heart feeling and just make the music I feel like making. That’s what it is. Music to me is freedom. It’s the freedom of expression. It’s just me. Maybe I don’t write the lyrics myself but I’m part of it. The music is mine. I make the music and I find the right people to write the lyrics with me. It’s simple as that. It’s just rock and roll isn’t it?"

Q: So what is the definition of black metal to you then?

Abbath: "Lay down your souls to the gods rock and roll! Black metal to me is Venom, 1982."

Q: Do you think black metal should just be about the music itself or do you think religious, theistic and political beliefs have a place in it as well? And do you think fans of black metal need to share similar beliefs with the bands they support? For example, can you be a devout Christian that is also a fan of black metal?

Abbath: "You know black metal is, it’s supposed to be rock and roll. It’s the Devil’s music. It’s about freedom and it’s about fuck off to those who would tell you what to fucking do or whatever the fuck it’s just, be your own god. Work your own mysterious ways. Believe in yourself and have a kick ass fucking time. Bang your fucking head. Be cool. It’s rock and roll, yeah, that’s what it is. Without rock and roll you know, without Buddy Holly there would never be a fucking Venom or a Motörhead. It’s just you know, raise your fist and kill."

On January 23rd, Abbath performed at the O2 Forum in London, England. Fan-filmed video from the show can be viewed below.

Abbath released their self-titled debut album on January 22nd via Season Of Mist. The album is now streaming below in it’s entirety.

Order the new album at this location.