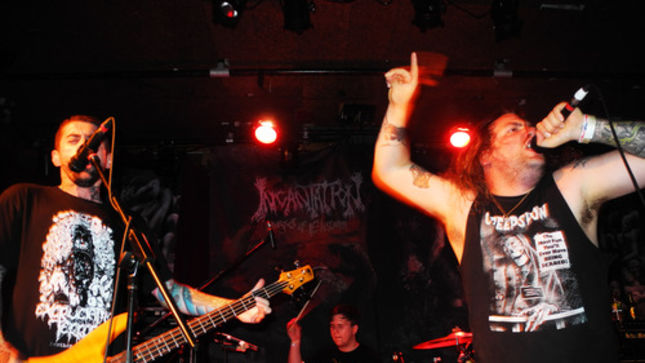 The newest slab of executioner-style Northern death metal mayhem from Abyss has been delivered as the Ontario-based mob prepares for their Heretical Anatomy debut LP to strike via 20 Buck Spin. BraveWords is streaming the album below:

Recorded and engineered by Chris Hegge at Audiolab, Toronto in the grip of winter 2014, Joel Grind of Toxic Holocaust adds his touch to the production of Heretical Anatomy, mixing and mastering Abyss's malformed death metal and the horror of its Lovecraftian persona. According to a press release, the frenzied blasting of early American and UK death metal and grindcore, before a distinct separation between the two existed, is a hallmark of Heretical Anatomy, yet the overwhelming speed scattered throughout the album's duration is expertly applied, never descending into a one dimensional space where only velocity is the basis for existence. Songs are crafted with the care of the elder gods, rigorously refined with a seasoned sophistication, always maintaining a sharply primitive ferocity.