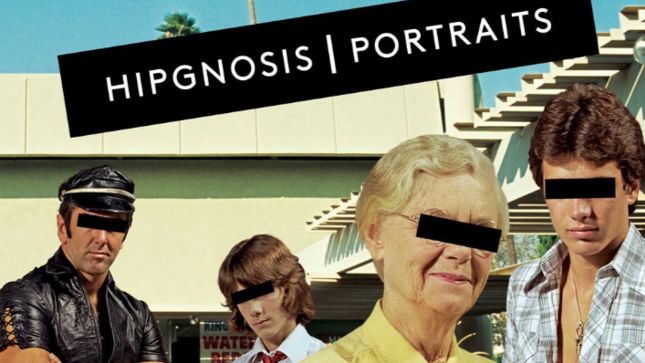 At the zenith of the rock era, Hipgnosis (Storm Thorgerson, Aubrey ‘Po’ Powell and, later, Peter Christopherson) established themselves as the most important design collective in music history. Hipgnosis | Portraits is a unique body of work spanning a particularly creative time in the world of music and theatre

Their innovative cover art defines the albums of the biggest names of the late 1960s, 1970s and early 1980s; AC/DC, Black Sabbath, Peter Gabriel, The Police, Genesis, Led Zeppelin, Pink Floyd, Paul McCartney & Wings, Yes and The Who, to name just a few. Their iconic designs – including Pink Floyd’s The Dark Side of the Moon, Led Zeppelin’s Houses of the Holy and Peter Gabriel’s eponymous suite – grace a staggering number of major releases.

In rejecting the posed, conventional band photography of the day and embracing the possibilities of the vinyl gatefold format, they changed album design forever and created a vast array of sublime portraits. Packed with archival riches from lost sessions, shoots, and mock-ups, Hipgnosis | Portraits is narrated throughout by Po – the last living member of the game-changing triumvirate – whose uncanny recollections put paid to the myths surrounding the genesis of these seminal works.

This book is divided into two main sections:

- Part I, ‘Imagination’, tells the story behind the cover shoots from germination through to the final sleeve design, supported by a wide array of archival materials.
- Part II, ‘Realization’, showcases the band portraits themselves in beautiful, large-scale reproductions.

As co-founder of the photodesign studio Hipgnosis, Aubrey ‘Po’ Powell photographed unique images in surreal landscapes, bizarre locations, and studio set-ups alike for the iconic album covers of many famous bands, musicians, and performance artists. In the process he amassed an extraordinary collection of portraits that reflect an equally extraordinary period.

In 1967, Storm Thorgerson and Aubrey Powell took on a commission to design the cover for Pink Floyd’s second album A Saucerful of Secrets, set up Hipgnosis Studios together, and embarked on a whirlwind career that took them through the higher echelons of the music world. Along the way they invented unusual images for Pink Floyd, Led Zeppelin, The Rolling Stones, Peter Gabriel, Paul McCartney, Black Sabbath, The Who, Genesis, The Police, Yes, and many, many others. The pair, later joined by lighting wizard and industrial music composer Peter Christopherson, developed close personal ties with their artists, allowing them unprecedented access to situations normally regarded as off-limits.

Following the advent of MTV and the beckoning call of advertising agencies keen to exploit their skills, the Hipgnosis team turned their hands to film-making with tremendous success. Alas, the constraints of working to strict briefs and the demands of tight scripting for TV commercials after years of creative freedom took their toll and the three went their separate ways. Storm Thorgerson eventually returned to what he enjoyed most and did best – creating surreal pictures. Peter Christopherson continued in film but gave it up for his industrial music career with Throbbing Gristle and then Coil.

Aubrey ‘Po’ Powell retained the name Hipgnosis making highly successful music films with a roster of big stars, and writing and directing numerous award-winning documentaries, films, and TV commercials. Recent high-profile projects include the documentary The Bull Runners of Pamplona, (writer and director) and the movie What About Dick? (director) with Russell Brand, Eric Idle, Billy Connolly, and Eddie Izzard. He is currently making the cinema release of Monty Python’s stage show One Down and Five to Go. As Pink Floyd’s creative director, Aubrey shot the video ‘Marooned’ for the band in Chernobyl, and is curator of ‘Their Mortal Remains’, a complete retrospective of Pink Floyd’s career that will tour worldwide.