AC/DC Guitarist ANGUS YOUNG On The Absence Of MALCOLM YOUNG - "I Miss Him In A Physical Sense; I Feel Him When I've Got The Guitar Playing" 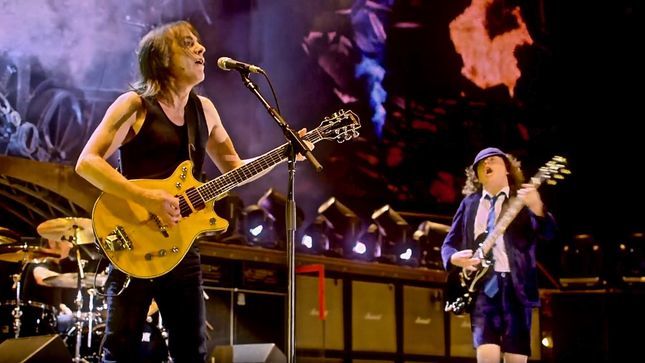 Guesting on The Rock Show With Johnnie Walker, which airs via BBC Radio 2, AC/DC guitarist Angus Young discussed the band's new Power Up album, and discussed moving forward without brither / bandmate Malcolm Young, who passed away from dementia in 2017 at age 64. Check out the interview here.

Angus: "He was also very practical in how he would do things. He knew exactly, when the band was formed, how he wanted it to sound, and the style of the music which we would play. So it was all his direction, and it was that direction we followed all the way through our career. I miss him when he's not there in a physical sense. But I feel him when I've got the guitar playing. I can feel him around me."

Last week, AC/DC landed at #1 on charts in 18 countries with their 17th studio album, Power Up. The band took the top spot on charts in Austria, Australia, Belgium, Canada, Switzerland, Germany, Spain, Finland, France, Greece, Ireland, Italy, Norway, New Zealand, Portugal, Sweden, UK, and the US, where the album entered the Billboard 200 chart with over 117,000 copies sold in the first week.