AC/DC Lands On Top Of UK Official Album Chart, Band Thank Fans As Power Up Claims Fastest-Selling Album Of 2020 So Far - “You Are, And Always Have Been, Our Guiding Inspiration” 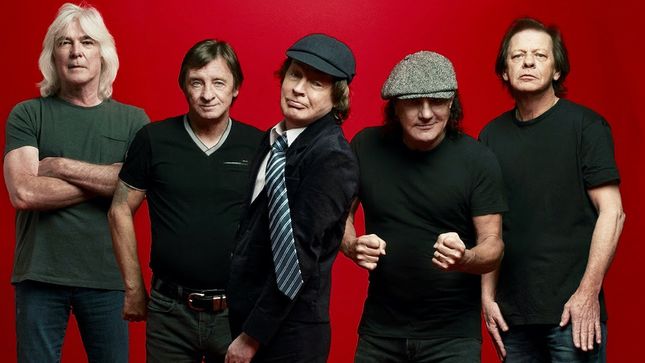 AC/DC's 18th studio album, Power Up, smashes in at #1 on the UK's Official Albums Chart with the biggest first-week tally of 2020 so far.

Notching up 62,000 chart sales, the band have comfortably taken their place at the top of the 2020 leaderboard of fastest-selling albums, overtaking Kylie Minogue who racked up 55,000 chart sales of DISCO just last week and is this week’s #5.

Celebrating their chart victory, AC/DC’s Angus Young said: “A very big thank you to everyone who put in their time, effort and creativity to get PWR/UP to Number 1! Also a big shoutout to all our fans, old and new. You are, and always have been, our guiding inspiration”.

Brian Johnson recently released the video below, thanking fans for the response to Power Up, and revealing plans for the next music video.

Says Brian: "What we want to do is just thank you. I mean, we've been so overwhelmed these last few days, getting the reports in from all around the world about the album doing so well. We knew that was a pretty good thing that we'd done, we wanted to make Malcolm proud, and you've made us proud, because we've made Malcolm proud, if you can get your head 'round that. But, we've just had a wonderful time. You know, from four years ago guys, you've got to remember, we were, you know, all but over and some people thought... but they forgot about the AC/DC fighting spirit, you know, you never give in, you never leave your wounded behind, and you always come back.

"I'm gonna thank you again. You know, this isn't over, you've got to stay attuned, because what we're going to do is, we're going to try to do a virtual video of the next song that we want to bring out off the album. The thing is, none of us have ever done this before, so it's going to be brilliant, standing like a tit, by yourself, miming on a microphone because you know that we're miming, and we know that you know that we know that you know that we're miming, but still... it's gonna be fun. Angus is gonna be playing down in Sydney, Phil's gonna be whacking the drums in New Zealand, and Cliff's gonna be paddling away... he might even come up to join me, 'cause he's not too far down the road. And Stevie somewhere in England. We hope to put an exciting video together.

"Thanks once again, because the reports coming in around the world about the album going to #1, doing all this wonderful stuff, it really still is exciting to this day. I'm still... it's like me first record I ever brought out. And it's thanks to you guys, you stuck through us, through thick and thin. Stuck with us through thick and thin, I beg your pardon. And we'll never forget it, we never will.

"When this is all over guys, you know, when this crap is over, we wanna see you in your home town. We'll try everything we can to get there and play for you live, play these great tunes live for you. But until then, I just want you to stay safe."