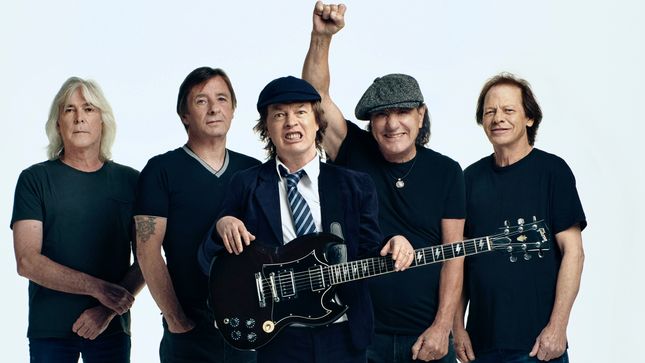 AC/DC members Angus Young and Brian Johnson are guests on the new episode of Dean Delray's Let There Be Talk podcast.

Says Delray: "The guys sit down with me for their first ever podcast and talk all things AC/DC. Back In Black, Brian's audition, Angus Young's favorite Gibson SG, the songwriting process and of course their brand new crushing record, Power Up, produced by the great Brendan O'Brian out November 13."

Watch/listen below, or via one of the streaming services listed here.

AC/DC will release their new album, Power Up, on November 13 via Columbia Records. Guesting on Spain's RockFM classic rock radio's El Pirata, guitarist Angus Young discussed the album, including the rumours that guitar parts from founding AC/DC rhythm guitarist Malcolm Young, who died in 2017 suffering from dementia, appear on the record.

Angus: "I know a lot of people have been saying, did Malcolm actually play, is it his instrument on the new album? I chose not to do that because I felt Malcolm wouldn't like me trying to splice his guitar work. Malcolm and I wrote a lot of songs together, we always wrote together and each one contributed their ideas. Malcolm had come up with ideas for the choruses, we had some notes. Some parts were already composed and I had to polish them. In other cases, he had left only a small part and I had to pull from memory and complete the next verse. "