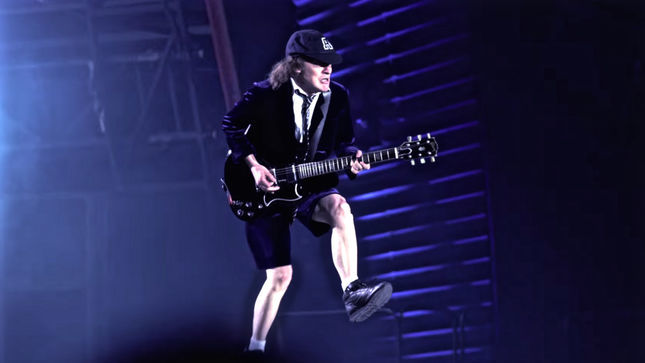 Premier Guitar’s Chris Kies traveled south to hang with AC/DC techs Trace Foster and Greg Howard before their show at Atlanta’s Phillips Arena. As you watch this video, you’ll slowly understand why both techs claim that this is both the easiest gig (because of the light load of equipment) and the hardest gig (no pedals or effects to hide behind) they’ve ever had.

If things go smoothly, Angus will only use this 1967 Gibson SG during the entire show. All of the volume and tone pots have been changed several times because he sweats so much causing everything to deteriorate and corrode. The pickups have been swapped out with custom-wound, wax-potted Seymour Duncan humbuckers that have a resistance of 7.8k. All of Angus’ guitars use Ernie Ball Slinky (.009-.042) strings and he rocks with Fender Extra Heavy picks.

His backup is a 1970 SG Custom that he used on the Back in Black world tour during the early ’80s. The guitar originally had a natural walnut finish, was loaded with three humbuckers, and had a Maestro vibrato.

AC/DC’s Rock Or Bust tour landed in Columbus, Ohio on September 4th. Check out a recap video below, as well as a trailer for tonight’s show in Detroit, Michigan.

Rock Or Bust US dates are listed below.