AC/DC Share The Stories Behind Their Biggest Hits On Essentials Radio On Apple Music Hits; Video 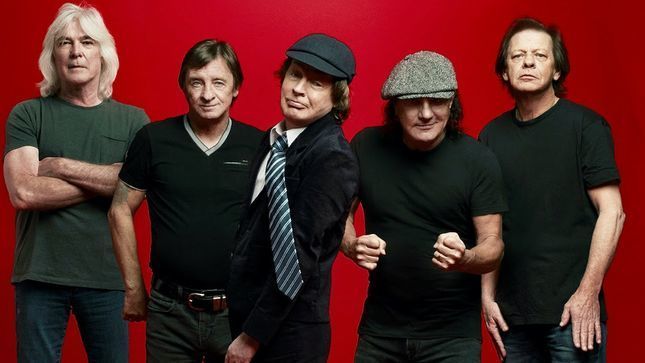 AC/DC’s Angus Young and Brian Johnson join Zane Lowe on Apple Music to discuss their most celebrated songs, like "Highway To Hell” and “It’s A Long Way To The Top", one of the most successful albums of all time, Back In Black, dealing with the loss of bandmate and lead vocalist, Bon Scott, and the addition of Brian to the band. Every other weekend on Essentials Radio, a rotating cast of hosts explores the legendary hits that turned some of their favorite artists into superstars and household names.

Angus Young on losing Bon Scott: "It was like it put you in shock because you always kind of think the people around you and being young, you have that thing of you're almost kind of fearless and a little bit of... I don't know what it is when you're in your youth. You don't think of dying. And so it was a kind of shock to us all and it affected everyone in different ways. But the one element of it that held it probably together for me is again, Malcolm, because after a few weeks he called me and he said, "What are you doing?" And I just said, "I'm just moping about it, my eyes." And he said that, "Listen, why don't the two of us do what we were doing before?” Which was we'd been in a rehearsal room. And it's strange, that was one of the last places that we had seen Bon was in the rehearsal room. And he said, "Why don't the two of us go back to that and just work on songs and ideas and just sit and do that." And I thought, "Okay, I'll give it a shot." So that's what the two of us did that kept us going through the whole process, because he said, "We won't think of anything. We'll just do that. We won't think of what we're going to do. We'll shut off managers and record people and whatnot. We just shut all of that away and just concentrate on, focus on doing these song ideas." And that's what we did."

Zane Lowe: And that became Back in Black.

Angus: "And all of those tracks, yeah that we focused on. Yeah."

Angus Young on the origins of “Highway To Hell”: "Actually we had started with the Highway To Hell album. We had actually started. We'd been in Miami, and we'd been in a rehearsal room and that's what we were doing. We were putting together new tracks. And we'd been there a couple of weeks and we were going a bit slow. And then I had come in one day with Mal' and just before we got in, I said, "I've got a good idea in my head." So I got in and he came in, and I started playing the beginning, the intro. And so I was doing the da-da-da, da-da-da. And then I said to Malcolm... I had this thing about the drums. And I said, "I just want it to come in in the right spot." And he said, "Okay." Malcolm got behind the drums and he said, "Right, you let me know when you hear the downbeat, the first downbeat of what you want." So that's what I did. I said, "I'll do my drop," and he said, "And I'll follow your foot." So he came in with the beat. That's how we set it up. But I didn't have anything to sing. And he was saying to me, "Well, have you got something you can come up with?" And I said, "Okay, give me a few minutes." And I went to the toilet, and then I was in the toilet and I was there and I'm sitting and thinking. And I'm just sitting on the throne more or less. And then I go, "I think I've got it. I've got it. I've got it. I've got the idea in my head." And then I came in there and I said, "I've got it. Highway to Hell." And I was over the chords that we had tried out through a chorus. And he went, "Yeah, that'll work." And he said, "If we spread it out a bit into full singing thing." So he came up with a spread of it, [singing] "Highway to hell.”

Angus talks about “For Those About To Rock”: "Basically that song, we put together, Malcolm and myself in a rehearsal place in Paris. And the reason why we were in a rehearsal place was originally we were going to go to a studio in Paris and record there originally. But when Mutt Lang, who was producing the album, he had got there and he thought, well, it wasn't quite capturing the sound. And he tried a few other places. And then he said, "We can make this work." And he got, I think it was the Rolling Stones' mobile studio to come out and set up and they hooked up and we more or less set up to record that album in that rehearsal room. But the track, "For Those About To Rock," it came out with Malcolm and myself, it was a combination. I had a little guitar thing going at the beginning, and Malcolm had this little guitar chordal progression that he had going.

"So the two of us worked on that and we came up with the verse idea of it. And the funny thing is, when we got to the chorus, we were going, "Okay, what are we going to sing on this?" And for me, I just thought, well, sometimes I go back of something I've read somewhere, and there was the writer Robert Graves, I believe his name was, I think he had a book out or a story he had put in one of the papers, because he did a lot of history stuff. And I had read it and it was, "For those about to die," and he went into a day in the Coliseum or somewhere in Rome at the time and the thing that the gladiators did. And I thought, "That might fit." So it was a case of, if I can come up with a way of singing something that can sing into it.

"And I think at first Malcolm thought, "Wait. What is he on?" And I'm going, "Well, for those about to ..." And I got it in, I got it all in, "For those about the rock." So that kicked off that. And then the other big thing in that thing is, when we were doing it, we had this break section that we were going to break down at the end, and we had this stop gap thing. And I think at first, "what are we going to put in this thing?" And in the background, I don't know who had it on, there was a TV and there was a cannon shots going and there was a guy who worked there, like a watchman in the rehearsal place, and you could hear these cannons going off. And then it just struck me, is you could hear it was so close to what we had been playing with those gaps, and I just said, "That might be cool that we have those cannons." And Mutt Lang went, "Yeah, that's going to help with that break part." So that's how that came to be."

Angus on “It’s A Long Way To The Top”: "Funny enough, when we did this song, we put it together almost in the studio because my brother George had said, "Okay, what have you got?" And Malcolm said, "Well, well, Ang's got this little intro lick together." So George says, "Okay, we'll just start with that." When we got in the little studio and started playing, George actually came out, he was there kind of directing. And anyways, we were playing away, George was calling that he was going to meet... And he's pointing his fingers at "little cuts, little cuts." And so I started doing like almost a Chuck Berry kind of little [inaudible 00:00:37]. And then from that it builded, and then he's going, "Okay, do your hook, do your hook, build to the hook." So that's what we did. We got to the chorus and the same thing again. Next verse, he would go, "Pull it down a little bit." And we would ride along with that and then he would go, "Right, up with the hook." And then after that, he's shouted out, "Solo time, lick."

"He was conducting us through the whole process. And we did that. It's funny with that track. That was one take because when we went in, he said, "Okay, go out and try a couple of other takes. You know what's all going, how other old parts of going." But we couldn't recreate the magic of that first one. In real time. Yeah, yeah. He said, "Try a few more takes." And he came back, he said, "Yeah, you've got a few nice ones." And he goes, "But listen to this." And he put on the first one and he went, "there's magic there. This is just magic in that take."