ACE FREHLEY On Former KISS Bandmates GENE SIMMONS And PAUL STANLEY - "To Be Honest, Neither Of Them Are Really Fond Of Each Other"; Audio 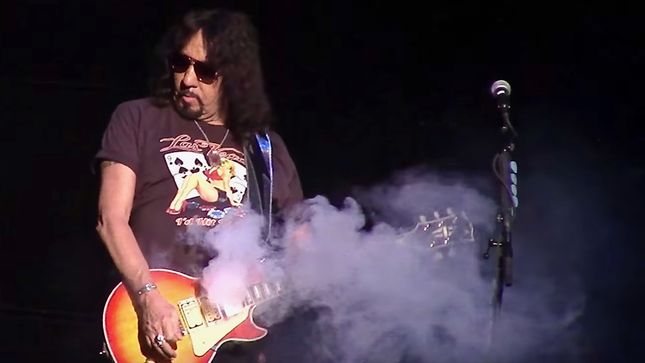 Ace Frehley is the guest on the new Walking The Floor With Chris Shiflett Podcast. During the show, Ace and Chris discuss gear, technique, Ace's history in KISS, and the idea of him rejoining the band on their upcoming farewell tour.

Asked why he thinks Gene Simmons and Paul Stanley have stayed together through the different incarnations of KISS, Ace responds: "Because they have completely different personalities. To be honest, neither of them are really quite fond of each other. (laughs) I mean, the last thing I heard is that Paul has his own dressing room, and that completely shocked me, because we always used to put on our makeup together, like four girls in a beauty parlour, you know, with four mirrors. We’d be talking while we're putting the makeup on, it was a ritual. (Having separate dressing rooms) doesn't appeal to me. If I was to be asked to come back to the band, I’d want everybody to put the makeup on and get ready together, like we used to, like old times.”

Listen to the podcast below:

NJ KISS Expo 2018 was held December 7th - 9th at the Hilton Parsippany in Parsippany, NJ. For the first time ever, Ace Frehley performed his classic KISS solo album in it's entirety on the final day of the event. Video footage can be seen below.

During a recent appearance on SiriusXM's Trunk Nation, Ace revealed he was planning to tour with Alice Cooper during the second half of 2019.