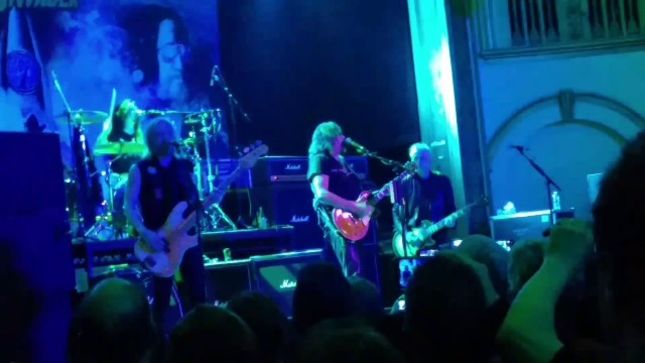 The studio cut of "Cold Gin" from Origins Vol. 1, released in 2016 and featuring McCready, is also available below.

On February 3rd, KISS legend Gene Simmons attended Frehley's show at The Saban in Beverly Hills, CA. A photo of the meeting posted on Frehley's official Facebook page marks the first time the pair have been photographed together since their 2014 induction into the Rock And Roll Hall Of Fame.

The caption attached to the photo above is as follows:

"Meanwhile ~ some guy name 'Eugene' crashed Ace's VIP meet-n-greet last nite in Beverly Hills without rendering payment. If any of you Rock Soldiers can identify this man of mystery, let us know!"

Louder Noise caught up with Frehley and his finance Rachel at the Revolver Music Awards in New York City on December 13th, 2016. Ace discusses his Origins Vol 1. album, plans for 2017, and that possible KISS reunion tour.

Asked if there are any updates on the KISS reunion rumours, Ace resonds: “I haven’t hear anything from Paul and Gene, you know, but if it’s going to happen, it should happen next year, I would assume. 2017 seems like a ripe year. We’ll just have to wait and see.”

Frehley recently updated his live itinerary for this year. Ace is headed to South America and Mexico for the first time since the KISS Psycho Circus World Tour in 1999. The complete tour routing is as listed: