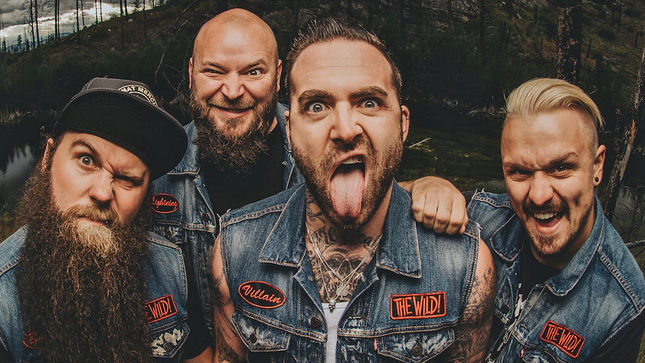 The Wild! were the opening band on the current – and fatal – Adrenaline Mob tour. They issued the following statement in the wake of the accident that took Adrenaline Mob bassist David Z.'s life via their Facebook page:

"To our fans, families & friends,

Yesterday our friends and tour mates in Adrenaline Mob were involved in a crash that claimed the life of their bassist and our friend, David Z. David was a very positive guy who loved to laugh. He was also an amazing musician. We are honoured to have shared the stage with him on this tour and will miss him dearly. Our hearts go out to David's family, the members of the crew still in the hospital after the crash, and to the entire Adrenaline Mob camp during this difficult time.

This was a very close call for us as we passed their convoy minutes prior to the crash. We thought about pulling over to assist with their tire change but just couldn't make it over to the shoulder in time and kept on driving only to receive a call no touring musician ever wants to receive a few minutes later.

To all of our family of touring musicians across the globe, PLEASE BE CAREFUL when on the road. None of us saw this coming and no one ever expects these kinds of things to happen, but unfortunately they can.

We are here andvery grateful to be alive.

Our condolences to David Z's family and friends. To Jane Train, Jason, Dale, Russel, Mike, Jordan & Rob : WE LOVE YOU GUYS and will see you soon.

All of our love,
Dylan, Boozus, Kid, Reese & crew

The Gainesville Sun is reporting Adrenaline Mob was involved in a fatal traffic accident in Florida. One person has died and six others were injured when a tractor-trailer veered off Interstate 75 near Micanopy and struck the group’s RV that had pulled off the highway with a flat tire. Out of the nine people who were in the vehicles, one died, six were taken to area hospitals, and the other two declined medical treatment. Of the six injured, three were listed in critical condition and the other three in stable condition.

"This talented, humble, sweet soul left us today way too soon. If you saw him perform you were lucky. If you knew him you were blessed. RIP David Z. You were a beast on stage and it was my pleasure to have shared it with you on your last days. Going to miss you brother."

David Z was also a member of the Trans-Siberian Orchestra. Long time friend and bandmate Chris Caffery posted on Facebook with the following message:

"I want to thank everyone for their thoughts and prayers during this difficult time.  When I'm able to digest this enough to put it in words I will pay my respects to my little brother David here. For now my thoughts and prayers are with his mother and brothers and those closest to him. Also with Russell and Mike Orlando and everyone involved in that terrible accident yesterday. Again, I appreciate your kind words. I see the words 'Sorry for your loss.' This wasn't my loss...the world lost someone pretty special."

Following are several more messages in tribute to David Z. from the rock and metal community:


4:30am here in Germany & I still can't process this...@zo2david was such a sweet soul & great talent. I'm heartbroken 😥 #RIPDavidZ pic.twitter.com/OmrbCixINI