AEROSMITH Guitarist JOE PERRY On HOLLYWOOD VAMPIRES - "I Think We're Creating A Voice Of Our Own"; Video 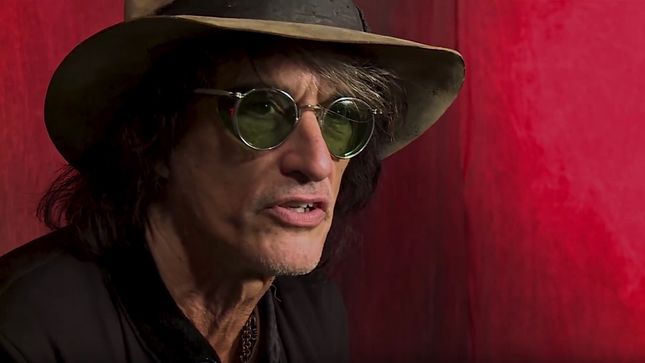 Alice Cooper and Joe Perry of Hollywood Vampires sat down in the Nights With Alice Cooper video studio to discuss what the secret is to their live performance. Watch below:

Cooper and Perry recently discussed how the Hollywood Vampires feels like they are becoming a bar band again:

Hollywood Vampires are currently packing out Europe’s arenas and working on a second album of entirely original material. The band's summer tour ends on July 8th in Rome, Italy, after which Cooper and Depp will continue working on their second album.

Time will tell as to whether their novelty value will survive, but both are adamant that they’re now taking what was once a bit of fun a lot more seriously.

“I think we really found our sound this time; I think we just had it by the tail on the first record,” Johnny Depp tells Dom Lawson for The Guardian.

Alice Cooper adds: “We’re doing what we keep telling young bands to do: don’t lose the anger in rock ’n’ roll, don’t lose that edge, don’t mellow out! All of the songs that have been written so far are really raucous rock ’n’ roll songs. It’s got a lot of attitude to it.”

Read more at The Guardian.