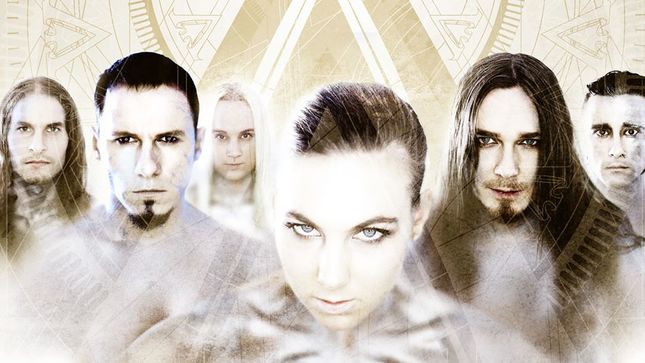 Swedish/Danish pop-metallers Amaranthe have released a lyric video for their song "Trinity", taken from their forthcoming album Massive Addictive. Check it out below:

Massive Addictive is true to its title. The band's signature, larger-than-life sound, comprised of kinetic riffing, pulsating beats and celestial, melodic choruses, remains in tact, but the album finds Amaranthe continuing to explore a range of dynamics and with a willingness to push themselves even further.

The songs that populate Massive Addictive are so incredibly catchy that they will take up residency in your brain for hours after you've turned the music off and you will find yourself humming the melodies or singing the choruses long after you've stopped listening to them. Massive Addictive is that memorable and that catchy. Massive Addictive was tracked at Hansen Studios in Ribe, Denmark with the sound sorcerer Jacob Hansen (Volbeat, Epica) at the helm.

The 12-song album is a flawlessly executed clinic of masterfully and carefully crafted European metal, boasting Olof Mörck's surgically precise riffs and soaring solos alongside Morten Løwe Sørensen's rhythmic thrust and Johan Andreassen's booming low-frequency assault. Elise Ryd's vocals are as emotive and empowering as ever, filling the room, while Jake E's melodic vocals are an outpouring of power. New screamer Henrik Englund Wilhelmsson puts his stamp on the material, as well.

The sound is both massive and addictive, from the unforgettable, driving sounds of "Drop Dead Cynical" to the anthemic title track to the stadium-sized soar of "Digital World" to the emotionally haunting power semi-ballad "True". Massive Addictive is an exercise in dynamics and is one that refuses to play by any sort of genre-specific, prescribed rules.

"We have lived and breathed this album every hour and every day the last year, and to know that this music is about to reach everyone's ears is beyond exciting," guitarist Mörck enthused about Massive Addictive. "Following the first leg of The Nexus World Tour, we sat down and agreed that we wanted the next album to be really fresh, new and even to raise a few eyebrows, all while retaining our signature sound."


He continued, "Massive Addictive is in every way that huge leap forward we wanted to achieve and the album definitely contain our strongest song writing to date. The press often asks us to 'describe the album with three words'; this time, the answer is simple - it's MASSIVE, it's ADDICTIVE, and most importantly, it's AMARANTHE!"


Amaranthe is currently on tour in North America supporting Within Temptation, which will be followed by a string of headline shows in the US. The band's schedule is now as follows:

October (with Within Temptation)