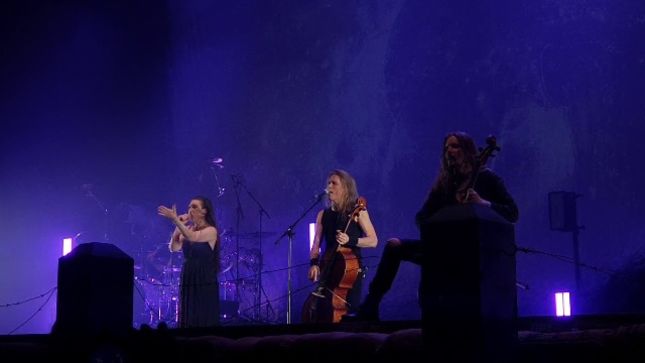 Both bands were out supporting Sabaton on their European tour. "I Don't Care" was originally sung by Saint Asonia / ex-Three Days Grace frontman Adam Gontier.

Amaranthe have released an official video for a new song "Do Or Die" featuring former Arch Enemy vocalist Angela Gossow. Check it out below.

Guitarist Olof Mörck states: "While Amaranthe's music is often uplifting, energetic and positive, sooner or later everyone needs to the deal with the obvious fact that the world is literally crumbling around us - and it is crumbling fast, thanks to the short sighted abuse of our common Mother Earth! We talked to legendary Angela Gossow of Arch Enemy fame to do an entire package of a video and a song, outside of any normal album cycle, and let our different perspectives on metal collide in a massive explosion; and it resulted in 'Do Or Die'! Together with Overbeck Media who shot the video, we delivered something really quite special, and Angela brings in a fresh strength to the trademark Amaranthe sound that is sure to resound all across the metal world! Death and Fire!!!"