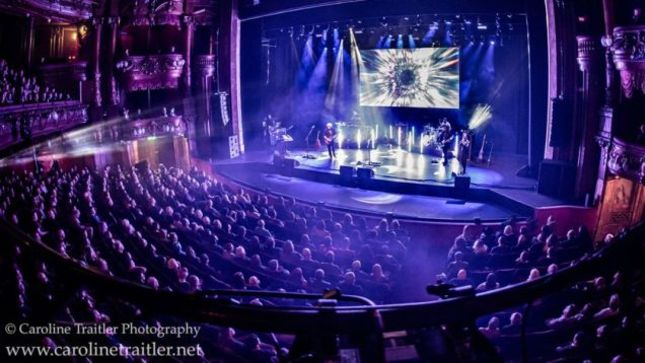 UK-based Anathema have checked in with some sad news, issuing an official statement regarding their decision to go on "indefinite hiatus." 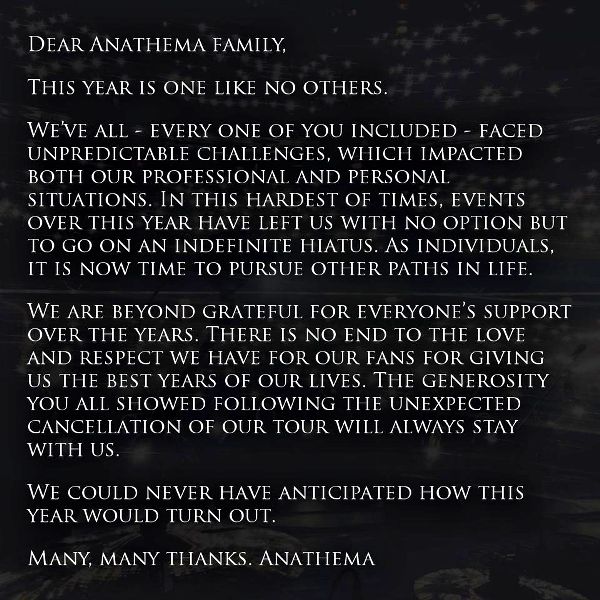 Mascot Label Group announced the signing of Anathema in 2019. The band have released 11 studio albums of fearless and uncompromising beauty. Ever since their debut Serenades in 1993, they’ve refused to be pigeonholed and have continuously evolved;  all the way up to their most recent studio album, 2017's conceptual masterstroke The Optimist,  which revealed some of the darkest, most challenging music they ever put their name to, as well as a series of live albums and compilations.

Led by brothers’ Daniel (Vocals, Guitar, Keys) and Vincent Cavanagh (Guitar, Keys, Vocals) along with John Douglas (Percussion), Lee Douglas (Vocals) and Daniel Cardoso (Drums), they were due to head into the studio in 2020 to work on a new album.

Anathema was founded as Pagan Angel in 1990 by the three Cavanagh brothers, drummer John Douglas, and singer Darren White, as a death/doom band. At the time White was the only singer of the band. The following year, Jamie Cavanagh left and was replaced by Duncan Patterson. Under this line-up, Anathema released their first EP, The Crestfallen (1992), and their first album, Serenades (1993). However, White left in 1995; Vincent decided to act as Anathema's vocalist in addition to his guitarist function in the albums The Silent Enigma (1995) and Eternity (1996), which were going into a more gothic metal direction.

In 1997, John left the band, and was replaced by Shaun Steels for the album Alternative 4 (1998). Both Patterson and Steels left the same year, replaced by Dave Pybus and a returning John Douglas, while former My Dying Bride keyboardist and violinist Martin Powell also joined the band (Daniel Cavanagh was also acting as the band's only keyboardist, and shared this position since). The only album released with this line-up was Judgement (1999): the same year Powell switched positions with Cradle of Filth's keyboardist Les Smith who joined Anathema, and Lee Douglas, John's sister, was added to the line-up as a backing and occasional lead vocalist.

The band released their sixth album A Fine Day to Exit in 2001, turning to an alternative sound. Shortly after the release, Pybus announced his departure and was replaced by the band's original bassist, Jamie Cavanagh, reuniting the three brothers in the band for the first time since 1991. There were no new members for the next ten years, with the albums A Natural Disaster (2003) and We're Here Because We're Here (2010) all being recorded and released by the same line-up, with the sound turning even more towards progressive rock; however, Daniel Cavanagh left Anathema in 2002 to join Antimatter, returning in 2003. Smith left Anathema in 2011, and Vincent and Daniel both assumed the function of keyboardist for the band's ninth album, Weather Systems, in 2012. The same year, Cardoso, the band's live keyboardist since 2011, joined as a full-time member.

The band's tenth studio album, Distant Satellites, was released in June 2014. Their eleventh album, The Optimist, won Album Of The Year at the 2017 Progressive Music Awards.