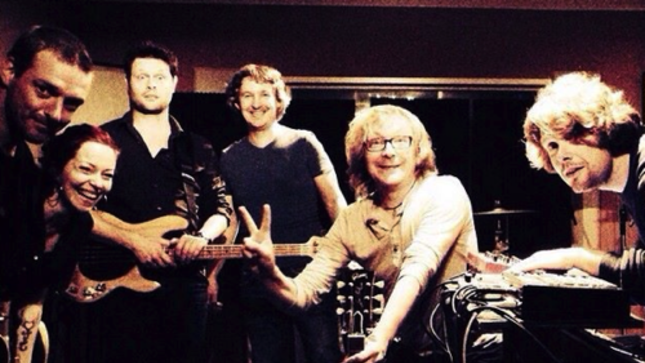 Vocalist Anneke van Giersbergen is featured in a new interview discussing her solo career, her recent reunion with The Gathering, working on The Sirens and The Gentle Storm projects, and thoughts on Devin Townsend. An excerpt from the story is available below:

The Gathering's reunion show, which took place on November 9th in Nijmegen, The Netherlands was an epic event featuring present and past members uniting on stage for the band’s 25th anniversary. For the diehard fans Anneke’s performance was the high point of a reportedly brilliant show, and she admits it was a very special experience being with her former bandmates again, right from the first rehearsal.

“I wasn’t in contact with the guys in The Gathering for a long time, for years, but then Hans (Rutten / drums) and I got in touch,” says Anneke. “There came a certain point where I felt everything was okay but I didn’t have the guts to pick up the phone, but I eventually thought it was beginning to become really silly. I dropped Frank (Boiejen / keyboards) and René (Rutten / guitars) an email and they told me everything was fine between us, which made me super happy. The first time we saw each other again we went out for sushi and the second time we were already talking about doing the anniversary show. It happened all at once.”
“And the rehearsals were super weird (laughs). I did one rehearsal with them and we did songs like ‘Saturnine’ and ‘Strange Machines’, which I’ve been doing in my solo shows for the past eight years, but when we did the songs together the guys were playing them and moving the way they did 10 years ago. It felt like we’d played together only last week. We locked in immediately; it was crazy.”

On Sunday, November 9th, The Gathering celebrated their 25th anniversary with a one-time special show at the beautiful new Doornroosje venue in Nijmegen, the Netherlands. All band members who ever graced the Gathering's line-up since the beginning in 1989 until the present day appeared on stage and performed in this unique show together.

The following members of The Gathering - past and present - performed on the night:

Fan-filmed video from the show is available below: