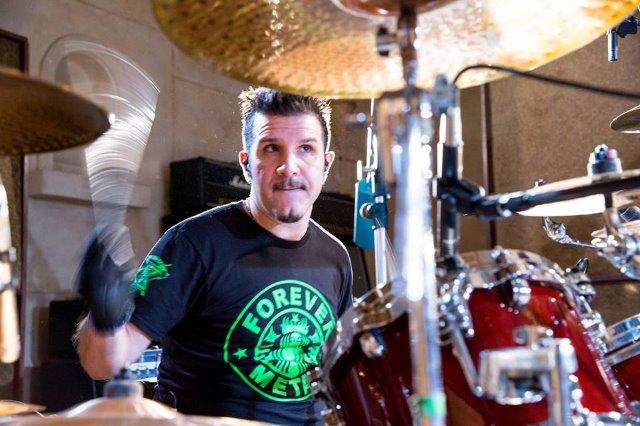 Anthrax's Charlie Benante will sit out the first few weeks of the band's upcoming North American tour that starts tomorrow, April 24th, in Denver, CO. Benante has been dealing with ongoing issues with the Carpal Tunnel Syndrome he had surgery for nearly two years ago and is still undergoing physical therapy.

"This was a difficult decision to make," said Benante, "especially as I had to miss dates on the last cycle because of my hand surgery. But the fact is, playing a show five or more times a week just isn’t realistic right now, I found that out when we were making our new album, and I don’t want to let the fans down by not being able to give it everything I have at every show. I was driving the other day and my hand went numb, so unfortunately, it's just not 100% yet. I figure I can play for maybe three weeks at a time but then I have to let it rest."
"The guys in the band have been incredibly understanding and supportive, and I hope the fans will be as well. The positive side is that I plan to use the time off the road constructively and focus on our upcoming album, continue to work on the package artwork and develop a number of other ideas I've got for the campaign."


Drummer Jon Dette (Slayer, Testament, Iced Earth), who has sub'd for Benante in the past, will fill in on these upcoming dates. Benante plans to join the tour for the May 17th Rock On The Range date in Columbus, OH.