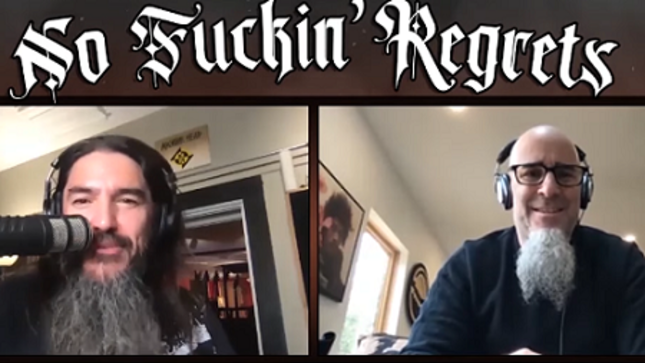 Legendary thrash guitarist Scott Ian sits down with Machine Head frontman Robb Flynn for an epic three hour discussion about his new project playing guitar with Mr. Bungle, the early thrash days of Anthrax, hanging out with Metallica bassist Cliff Burton the day Dave Mustaine got fired, helping Metallica record Kill ‘Em All, why AC/DC is so hard to play, singer Joey Belladonna’s audition with Foreigner's “I Want To Know What Love Is”, the making of the infamous S.O.D. album, and the tragic death of Cliff Burton while on tour with Metallica.

Mr. Bungle, who just released The Raging Wrath Of The Easter Bunny Demo, have shared a third and final single from the 11-song release, streaming “Sudden Death” (here and/or below).

Tickets are $15 and available now via mrbungle.live.

The Night They Came Home! trailer:

The Raging Wrath Of The Easter Bunny Demo features tracks written by the Eureka, CA-born band for their 1986 cassette only demo as well as a reimagined cover of the S.O.D. classic “Hypocrites / Habla Español O Muere” (a.k.a. “Speak English Or Die”) and Corrosion Of Conformity’s “Loss For Words”.

The album was produced by Mr. Bungle, recorded by Husky Höskulds at Studio 606, and mixed by Jay Ruston. Rhea Perlman narrates “Anarchy Up Your Anus”.

"Recording THIS music with THESE guys was an enormous head-rush of virtuosity and surprises every day in the studio,” explains Patton. “Trey’s video game-esque solos, Scott’s bionic right hand and cyborg-like precision, Dave’s caveman-meets-Bobby Brady-like drum fills, Trevor’s solid foundation and laser-focus to detail. There is nothing sweeter than getting your ass kicked by true comrades…where everyone has a singular drive and mission.”

Trevor Dunn adds: “Recording this record felt like we were finally utilizing our Ph.Ds in thrash metal. All we had to do was go back to our original professors for some additional guidance and talk them into joining us. Turns out we were A+ students. We even went for extra credit by revisiting some tunes that we'd given up on back in the day. It was less like a trip of nostalgia and more like the refining of an original, worthy document. We were haunted for 35 years by the fact that this music wasn't given it's due respect. Now we can die.”

The Raging Wrath Of The Easter Bunny Demo is available here, with the release available as a standard digipak CD and digitally as well as a collection of limited edition offerings:

The Raging Wrath Of The Easter Bunny Demo tracklisting: