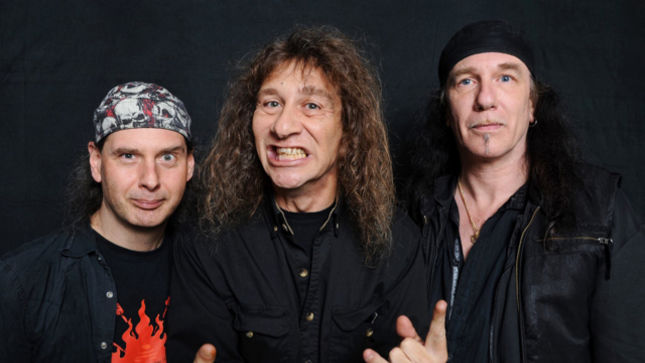 Canadian cult metal act, Anvil, will release their new album, Anvil Is Anvil, on February 26th worldwide (excluding Japan) via SPV/Steamhammer. The album will be available on digipak CD, LP, and digital download.

Striving to bypass the labels that have stood between the band and fans for years, Anvil created their new record Anvil Is Anvil with a direct-to-fan approach in mind. Recently, the band teamed up with PledgeMusic to assure that fan connection, but unlike other crowdsourcing campaigns put forth by bands in the hopes of amassing a recording budget, Anvil’s campaign strives to do so while truly providing fans with unique, once-in-a-lifetime experiences and personal, one-on-one opportunities that they will never forget.

Anvil’s 2009 movie documentary, The Story Of Anvil made them famous the world over. Their albums are considered landmarks among a musical genre. Their 2011 release, Juggernaut Of Justice, and their 2013 release, Hope In Hell, were powerful and unrelenting.

Anvil Is Anvil will be their most potent yet, and feature guitarist/vocalist Steve ‘Lips’ Kudlow, drummer Robb Reiner, and new bassist Chris Robertson in top form. Featuring no concessions to short-lived trends and no modern frills, the brand new Anvil record will feature traditional metal at its finest with massive classic rock elements – a sound that Anvil fans love and deserve.

Anvil and PledgeMusic are offering fans a chance to get up close and personal with the band, access exclusive content and be a part of a truly unique fan-to-band experience. With every pre-order, pledgers will get the AccessPass which will give them exclusive looks at behind the scenes videos, photos and messages from the band. Fans will also have several once in a lifetime opportunities to purchase: