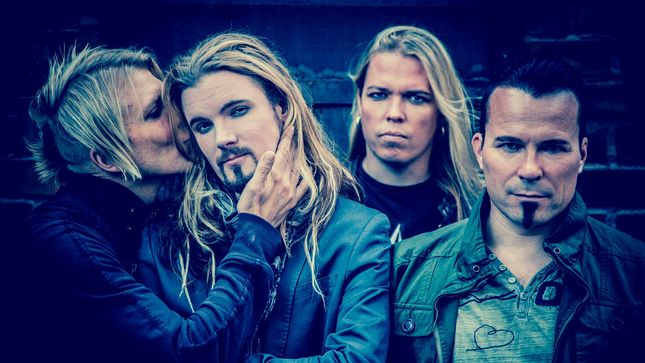 Apocalyptica will release their new album, Shadowmaker, on the following dates:

The official tracklisting is as follows:

The new track "Cold Blood" can be heard streaming below. Pre-order the album on here and get the track instantly.

A lyric video for the title track is streaming below:

Apocalyptica is a Finnish cello-rock band from Helsinki, formed in 1993. The band is composed of classically trained cellists Eicca Toppinen, Paavo Lötjönen, Perttu Kivilaakso and drummer Mikko Sirén. Their music borrows elements from a wide variety of genres including classical music, metal, world, folk and progressive rock. They have sold over four million albums to date.

The band’s recent albums included both instrumentals and collaborations with various singers, such as Corey Taylor, Adam Gontier and Cristina Scabbia. Apocalyptica have recently recruited an official vocalist, Franky Perez, who was part of Scars On Broadway, Pusher Jones and appeared on Slash’s first solo record.

Eicca Toppinen: “Nothing better could have happened than Nick being on board for this record. The pre-production time we spent with him in late August gave us so much confidence and input for the new songs. We are all excited and overwhelmed by his energy and creativity."

The band has arrived at the studio in Nashville to record the material for the upcoming release. Toppinen continues, “Having our singer (Franky Perez) with us for the last few months already made a big difference: For the first time we couldn’t get enough from spending time together at our rehearsal place in Finland but being in Nashville with all our instruments, Franky and Nick now makes us feel like little boys on Christmas. Writing and recording is taking a little longer than expected but I’m sure this will be one of the best Apocalyptica albums and we can’t wait to bring it out for you to hear.”

Before Apocalyptica will present the album along with a new tour production on an extensive European headline tour later this year, fans will get a glimpse of the new material when the band is supporting Sixx:A.M. for their long awaited North America dates in spring.

Eicca states: “When we heard about this tour, we loved the idea right away! We were on Nikki's radio show before and had a great time. I really liked Sixx:A.M.'s first two albums and am very much looking forward to the new record. Going on tour with Sixx:A.M. will bring a great night of music to all our fans.”