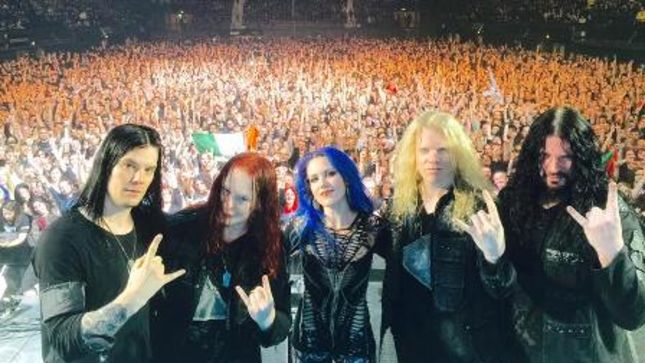 It was reported back in November that Finnish symphonic metal masters Nightwish had sold out their biggest UK show to date, headlining the 12,000 capacity sold-out Wembley Arena on December 19th. Arch Enemy were support along with Amorphis for the duration of the band's european tour, and fan-filmed video of Arch Enemy performing for the Wembley crowd can be viewed below:

Arch Enemy recently launched a brand new video for the song “You Will Know My Name”, recorded live in Seoul, Korea during the War Eternal World Tour.

As a part of the Live In Korea – Official Bootleg recording, the clip is one of many additional treats of the War Eternal (Tour Edition), which will be released via Century Media Records on November 20th.

The tour edition of Arch Enemy’s most recent album, which charted on #9 in Germany, #5 in Finland, #7 in the UK rock charts, and in ten other European countries, contains the “Stolen Life” (2015 Version) featuring additional leads by Jeff Loomis as bonus track as well as a DVD including an intense live set filmed in Korea plus all official videos.

In January of 2016, Mexico will serve as host Arch Enemy for three special events. These dates will kick off with the bands first ever appearance in Chihuahua, at the House of Blues. Night two will see a performance in Monterrey, at Café Iguana, with night three landing at Palacio de los Deportes' Pabellon Oeste. This particular event will boast a setlist of exclusive songs and feature very special guests, Armageddon, which features Michael Amott's brother / ex-Arch Enemy guitarist, Christopher Amott.

On the upcoming performances, Michael Amott comments: "Very excited to have the opportunity of returning to Mexico for three shows in January 2016! Mexico has been host to some of the craziest and most intense Arch Enemy shows - and this time will be no different I'm sure. This is War Eternal! ¡Que viva México!"

Tickets are available at TicketMaster for Mexico City and Chihuahua and for Monterrey on Super Boletos.