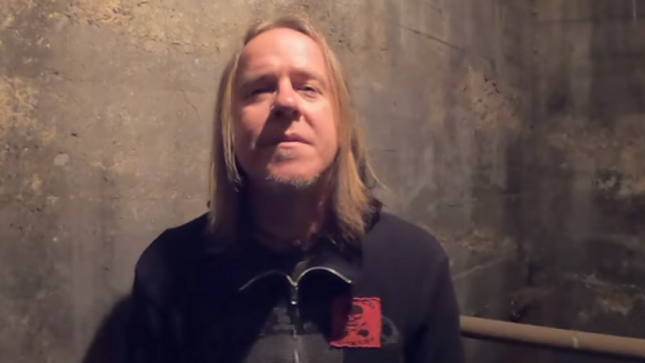 Born of life, love, and spirituality, Ascension Of The Watchers features pioneering vocalist Burton C. Bell, John Bechdel, and Jayce Lewis. Bell's unmistakable, harmonious inventory once renowned in one of metal's finest trailblazing acts has brought life to a new concept, a genre of its own: ambient atmospheres, melodies, and introspective lyrics that shed light of Bell's visions, as seen in their purest form.

Following a decade-long journey of writing and recording, from California, Pennsylvania, New York, and Wales, the trio released their Apocrypha full-length last month via Dissonance Productions. In commemoration of the release, the band has unveiled a clip recounting its creation. The observational documentary was filmed during the making of Apocrypha, and takes viewers through the history, collaboration stories, and recording process of what became the band's second album.

A music video for the song "The End Is Always The Beginning" can be found below. Says Bell: "Now, more than ever, my words are a true reflection of my mind. 'The End Is Always The Beginning' is a true statement, in every aspect of life, it all depends on the individual perspective. The video was created by Victor Hugo-Borges and is another surreal snippet into Ascension Of The Watchers. The meaning is unique for every listener and viewer. There is no incorrect analysis. Take what you will from it. For me, this is the beginning of a whole new chapter, and this song validates my personal strength to truly understand what it means to move forward."

The recording is available on CD, two limited vinyl formats and through all major digital outlets. Order on CD and vinyl here, or via streaming platforms here.

Ascension Of The Watchers lineup: