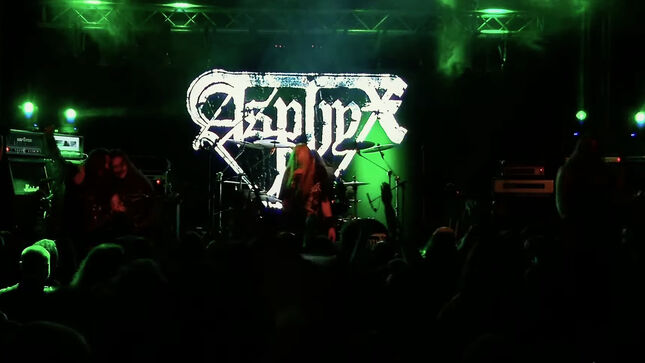 Necroceros was recorded at Tom Meier’s Tom Meier Studio and at Paul Baayens’ The Mörserstudio and then finally mixed and mastered by Sebastian “Seeb” Levermann at Greenman Studios. The album once again features front cover artwork by Axel Hermann.

Necroceros will be available in the following formats:

The limited Mediabook CD edition comes with an expanded booklet of 40 pages as well as the Bonus DVD “30 Years of Death Doom Domination, with over 2 hours of playing time. The DVD contains 2017’s special Asphyx live-show for their 30th band-anniversary with raw and pure camera-sound, as well as rehearsal footage and interviews with all current and former band members who attended this remarkable event.

Watch a trailer for the bonus DVD below:

The strictly limited Deluxe 2LP version of Necroceros is available either as dark green-yellow-white splattered vinyl (Limited to 500x copies via CM Distro or the band) or as white-black marbled vinyl (Limited to 500x copies available from Nuclear Blast). Next to the 30 Years of Death Doom Domination Bonus DVD, this Deluxe format of the album will come in Gatefold packaging with a bonus 12” vinyl, featuring 2 bonus-tracks (“Full Death Metal Scenario” and “Triple D”) on side C and an Etching on side D. This edition also includes the double-sided A2 poster, an exclusive LP booklet of 24 pages as well as an originally signed Asphyx photocard.

The album’s LP version will come on 180g vinyl and with a double-sided A2 poster in the following variations and limitations:

* Please note that the US versions of the LP will be available as of February 12, 2021.

Pre-order Necroceros in all its various formats here.