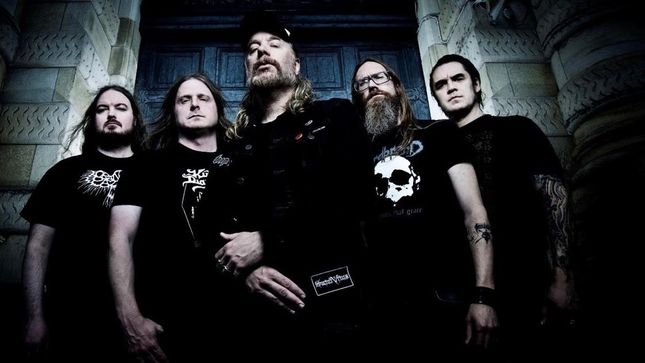 Ahead of their tour of Australia with The Haunted and Witchery, Metal Wani’s Jake Patton spoke with At The Gates guitarist Martin Larsson to discuss the upcoming tour, the band’s plans for 2019, their legacy and new music on the horizon. Listen below.

The upcoming tour of Australia is only the third time that At The Gates has made an appearance in the Land Down Under. While the band has an extensive touring legacy, Australia seems to have had to wait between visits for the band. When asked about how important these shows are in the scheme of the big touring picture for At The Gates and how happy the band is returning to Australia Larsson states, “It feels great, I don’t know what to say, I’m just grateful I get to do this. We’re very much looking forward to being back in Australia."

The conversation then canvasses the recently released music video for "The Colours Of The Beast", and how the raw and abstract nature of the song has been perfectly captured in video format. This includes an insight into the creative process behind the film clip and how the relationship between vocalist Tomas Lindberg and Costing Chioreanu of Twilight13Media helped bring this project to life.

Being a band that released their first music almost three decades ago, At The Gates has endured various changes that the music Industry has progressed through, including changes to recording and releasing music across different mediums. Speaking about the difficulties for the band when adapting to the changing Industry over the years Larsson pinpoints the band’s reformation following their 12 year hiatus as a key strength and discusses how the loyalty of their growing fan base enabled them to reform in a stronger position than before stating, “I think in general we have been lucky as a band because we’ve always had a growing following which, you know, I mean with us, for instance, we recorded an album in ‘95 and we quit, and then we did nothing for 12 years and when we finally did something we were so much more established than we where when we quit, and that usually never happens. I think our story is a little different than most."

The legacy that At The Gates has left behind them is one that will go down in the annals of metal history. As one of the pioneer bands of the Gothenburg scene, the band arguably has one of the most recognizable sounds in metal, and one which has influenced a multitude of bands in its wake. When asked whether or not it is surreal to think about the legacy that At the Gates has left behind and the countless bands that have attempted to bottle the magic that the band has created Larsson responds, “I don’t think too much of it, but when I do it’s strange, I don’t think you ever get used to that. I don’t mind it, it’s just you know, strange. But I’m sure it’s the same, you know when we meet people down the road that we grew up listening to and telling them the same thing or saying how we were influenced by this and that band."

Shifting tone to the band’s recently announced tour of North America with Amon Amarth, Arch Enemy and Grand Magus, Larsson talks about how the band wanted a change of pace for this tour, and wanted to encounter the challenge of trying to win over fans from other bands, before discussing the remaining tour plans for 2019 and writing for a new At The Gates album.