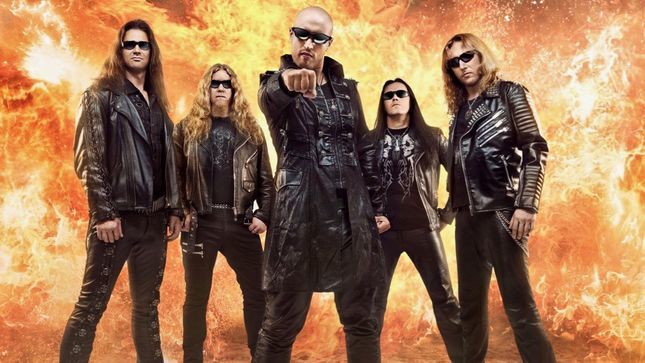 Below is the new official video for "Sweet True Lies" off Beast In Black's sophomore album, From Hell With Love, due out on February 8th on Nuclear Blast.

Just a few days before the group featuring former Battle Beast guitarist Anton Kabanen embarked on an extensive European tour as special guest to Finnish symphonic metal giants Nightwish, they unveiled the cover artwork of their forthcoming album, which was once again created by Roman Ismailov.

Anton comments, "This album was forged with passion, fury, love, dedication and I would even dare to say with maniacal obsession. And once again the stunning artwork by Roman perfectly captures the essence of what it was made of. This album is truly a creation that will burst from hell with love."

Adds Roman Ismailov, "It resembles a love-hate relationship in things that are part of our lives. Some things are like a beast that is almost impossible to tame. Then there is the love in what you do, which can overcome even the hardest obstacles."

Bassist Mate Molnar states, "We got a big chance from Nightwish to introduce ourselves to the greatest audience and this means that you can expect the wildest Beast on stage every night from this Friday until mid-December! We are extremely excited!"

In addition, more dates have been added to the band's From Hell With Love Tour 2019. The current itinerary can be found here. Watch an updated trailer below: