BEHEMOTH's Nergal Discusses Being Banned In Poland, Russia - "If They Ban Us In One City, There Are Still Thousands And Thousands Of Cities We Can Still Explore..." 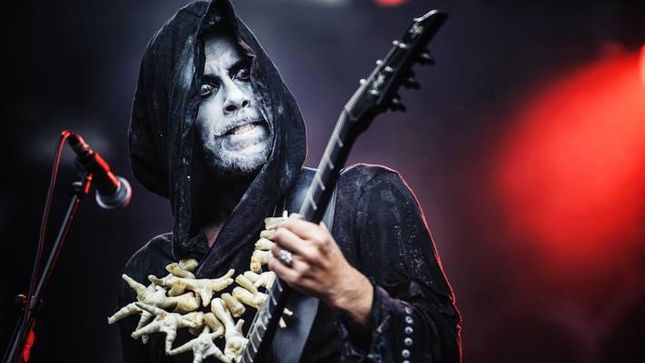 MyGlobalMind's Alan Daly has issued a new interview, conducted with Behemoth frontman Nergal. In the following excerpt, Nergal discusses being banned in the band's home-country, Poland.

Q: So, back in October you had a performance scheduled in Poznań, which was banned. How did it make you feel to have been banned from performing in your own home country?

A: "I kinda foresaw that. Occasionally, here and there, you get people protesting, and some politicians that are not necessarily fans of our band or supporters of our philosophy. But you don’t need to be, to let our show go on. For some reason they just want to stop us. They consider Behemoth as probably the worst evil on Earth and public enemy number one. I’m guessing there’s a political game being played there."

Q: It seems like they make you a scapegoat; somebody to blame for the evils of the world.

Q: And on the other side, your last two albums went to number one in the charts in Poland. But yet this same band can’t perform in their home country.

A: "What makes life so exciting is all the contradictions, and all the extremities. That’s what I love the most."

Q: You’re also pushing the boundaries yourselves and you come to expect these knee-jerk reactions.

A: "But then again, I’m kinda drawn to these difficult situations. So if I can sense that there’s some problems waiting for us, I just fucking go into it and see what happens."

Q: Do you fear that perhaps your performances might be banned in other cities and countries now that Poland and Russia have set precedent?

A: "Whatever. If they ban us in one city, there are still thousands and thousands of cities we can still explore, and come back and play and be successful. There’s still a few steps to be taken to get to the civilised level. Civilised places would just let artists do their job, no matter what. And I think we’re still a bit behind. But it’s good. It means there’s potential to work in this territory."

Behemoth recently premiered a new live video for their song "Ora Pro Nobis Lucifer" from their latest album, The Satanist. This marks the first ever official live video for the band. Sparing no expense or artistic integrity, this video was shot by long time Behemoth video collaborators, Grupa 13.

Furthermore, after receiving numerous emails from fans asking the band to release both of their latest EPs on CD, the band have answered. Nergal comments: "We have talked about this for a long time – whether do this or not. Finally, we've decided to make it happen. BUT still in a strict limit to keep this stuff exclusive."

Cannibal Corpse and Behemoth will join forces beginning on January 28th in New Orleans, LA at the House of Blues. To open the show, two of Sweden's finest metal acts have been enlisted: Aeon and Tribulation.

Go to this location for Behemoth's complete tour schedule.