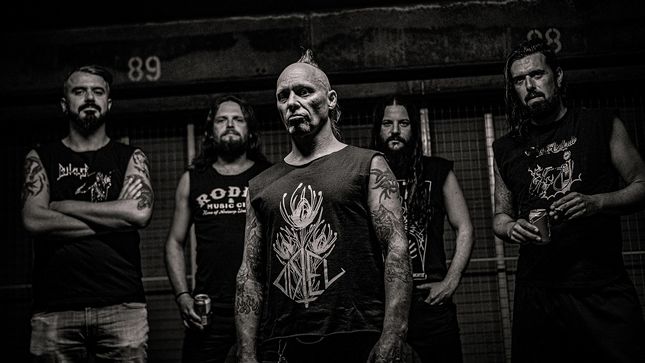 Bark is a metal band from Antwerp, Belgium, which had its beginning in late 2014 and was born from the ashes of the rock ‘n’ roll band Aguardente. Drummer Ward Van der Straeten and guitarists Rui Da Silva and Martin Furia (ex-Jesusmartyr and Furia), began to play and laid the foundations for a new band. Given the nature of the short, rabid songs they were making, they decided to call the band Bark.

With a view to the release of Written In Stone, their third full-length material that will be released on December 10, the group presents the official video for the song "I'm A Wreck", the first single of the aforementioned album in question.

The track is a brutal and faithful demonstration of the essence of the band. Aggressive riffs, forceful drums and fierce voices are some of the features present in the first single of the new Bark LP, which acts as a prelude to everything that the audience will be able to find on the album.

The band recorded their new LP where the limits have been pushed even further, turning it into an album of extremes, in which brutality meets melody in a more than wild way. Produced, mixed and mastered by Martín Furia (Nervosa, Evil Invaders, Destruction, Flotsam and Jetsam) at Trix in Ambers, this LP will set the bar high for the whole.

Written in Stone will be Bark's third studio album and will be available on December 10 on all digital platforms.The album cover was designed by the Brazilian artist Alcides Burn, who has worked with such artists as Krisiun, Obituary, Lockup, among others.

Martín Furia, guitarist and producer of the album, had the following to say regarding this release:

“After two albums with great reception in Europe, we are very excited that" Written in Stone "can be released in Latin America. We are proud to have done it entirely from songwriting to final mixing ourselves. We think this is the best example of what the band is capable of, from brutality and intensity to groove and melody. "