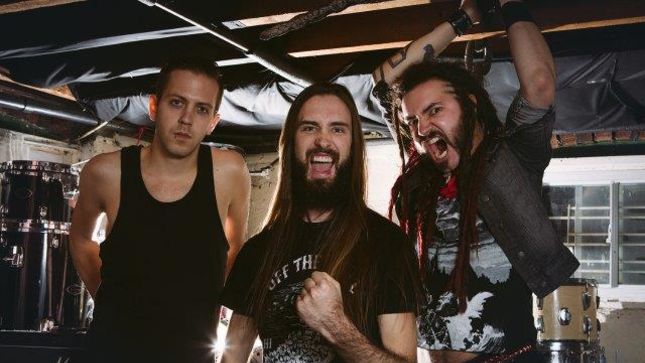 Toronto based heavy metal trio Black Absinthe are surfacing from the basement to unleash new tunes from their debut album Early Signs Of Denial, produced by Dave Baksh (Cross Dog, The Mahones), plus mixed and mastered by Frank Gryner (Rob Zombie). Set for release on May 13th, the album is the band's first professional recording to follow their three self recorded EPs Live At Coalition (2014), Noise Complaint (2014) and Augusta (2012).

Black Absinthe's powerful heavy riffs and bass lines are reminiscent of classic thrash and new wave British heavy metal with a range of progressive to classic rock influence. A full album stream can be found below.

The title Early Signs Of Denial is a conceptual connection to the themes of fear, corruption, and overcoming disparity, which is explored in the album's songs. The record has emphasis of crushing modern tone, polished instrumental sections, soaring vocals and a blending of contemporary and classic metal. With each track, this unique record represents different aspects of Black Absinthe’s diversity in song writing. The band does not tread lightly over their new wave of British heavy metal song style or their technical and progressive metal influences.