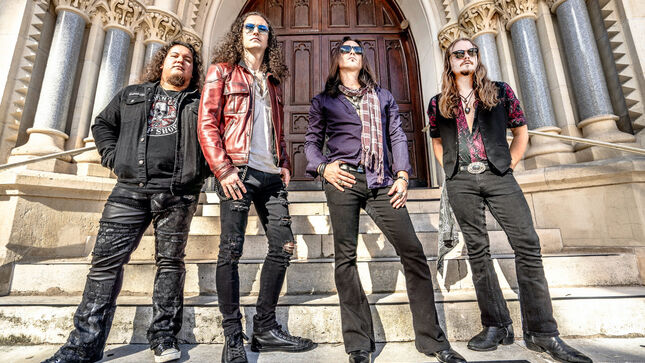 Austin hard rockers, Black Heart Saints, who packed a one-two punch with the release of their recent hit singles “Misery” and “Lines”, are kicking off their summer tour dates with Saliva, The Sturgis Motorcycle Rally and more with the announcement of a brand-new song and video.

Described by the band as a “groove-infested tune with a heavier, modern feel," “Reach The End” is released first as a video (see below), and then made available for download on all DSPs Friday, July 16.

“We can’t think of a better way to celebrate going back out on the road and performing live for our fans than by releasing our new single,” said Guitarist Mark Sean. “’Reach The End’ blends the hook-laden, heavy sound that we are known for with an edgy vibe that we think will appeal to a broader audience.”

To capture the song’s more progressive sound, Black Heart Saints turned, once again, to Award-Winning Film Maker Taylor Fredricks from Static Heart Productions to film the video. According to the band, while it is “a commentary on the inner-workings of the music industry, where artists have to ‘sell themselves’ to get to the next level,” it is also filled with the same dark humor that the group has become known for.

“Our last music video series premiered at Alamo Drafthouse theaters, so we knew we had to step up our game with this latest release,” said Sean. “For ‘Reach The End’ we worked with Taylor to put together a website and hotline phone number to promote the single and music video, which can be found here."

The Texas rockers also re-enlisted Producer Omar Vallejo at 512 Studios in Austin, TX, who worked with the band on their last album Misery (2019), for the single. Calling Vallejo the “real deal,” Sean says “he brings out the best of us every single time.”

“Reach The End” is the first new music since Black Heart Saints’ successful EP Misery in 2019. Not only did it land the band in the Billboard Mainstream Rock charts twice but its commercial success also paved the way for appearances at SXSW, Sturgis Motorcycle Rally, and serving as the support act for such national artists as Slash featuring Myles Kennedy & The Conspirators, Sevendust, Steel Panther, Pop Evil, Buckcherry, Dirty Honey, and more.

This year, Black Heart Saints will hit the road performing shows and festivals across the US and have plans to release additional singles and videos as a part of new collection of music.