BLACK SHEETS OF RAIN Frontman RICH DAVENPORT Talks Debut EP - "I Wrote The Lyrics For 'Weight Of Shadows' After ROBIN WILLIAMS Died; I Was A Huge Fan" 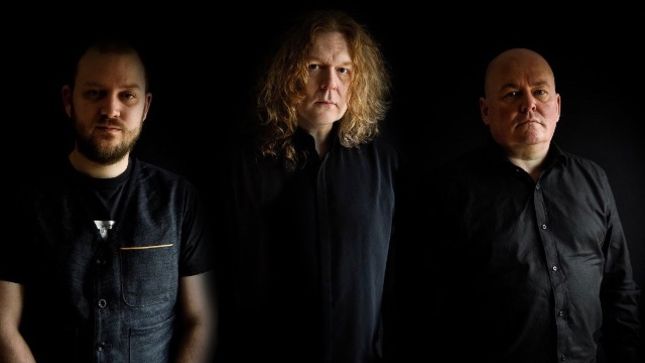 UK heavy metal power trio Black Sheets Of Rain will release their debut EP, In The Eye Of The Storm, out on April 26 via W.A.R. Productions. Guitarist / vocalist Rich Davenport recently spoke with journalist John Tucker about the EP; an excerpt from the discussion is available below.

Although the album is lyrically quite varied – and extremely interesting – Davenport points out that “apart from 'No Rest', the songs are all about surviving the rough stuff in life, although we always try to keep things hopeful in the lyrics. ‘Through The Storm’ is a song I originally wrote in the Nineties, but it came to mind a few years ago when my wife had a serious incident, nearly died, and was hospitalised for four months. The song is about sticking with each other no matter what. 'Still Spark Something' is about a near-fatal asthma attack I had in 2016, which was pretty scary. I couldn’t breathe through my lungs at all, and was having to use the breathing technique I use for singing, which is from the stomach and diaphragm. Thankfully the ambulance team arrived just in time, and the song is about being thankful for the people who were there for me as it was happening and afterwards."

"'Force Of Habit' was an idea of Matt’s, comparing the idea of a toxic relationship that someone is struggling to leave with an addiction. And I wrote the lyrics for 'Weight Of Shadows' after Robin Williams died; I was a huge fan, and I’ve had battles with depression myself over the years. The verses are trying to describe what depression can feel like, and the chorus is the voice of a friend talking to a person suffering with depression and feeling suicidal, offering to stay with them till it passes. The song is coming out as a single for a charity that helps people who are struggling with depression, and also helps people who’ve lost a loved one to suicide, called Ian’s Chain.”

Black Sheets Of Rain have released the first single, "No Rest". Watch a lyric video for "No Rest" below, and order the EP here.

The track "Through The Storm" is featured in Surprise, a recent horror movie from Hermitage Wanderer/Greenhouse Films, which premiered in Manchester in November 2018 and will be sent to film festivals in 2019.

The band members have gigged extensively over the years in the UK and abroad, and have worked on a number of self-released albums, singles and EPs in previous projects. Shows will be forthcoming to promote the release of their debut EP, with a view to following this with a full-length album in 2020.

The EP was produced by Tony Wilson, producer of Tommy Vance’s legendary Friday Rock Show, and of countless sessions for John Peel’s long-running BBC radio show. Wilson has continued to work extensively as a producer, and the band enlisted him for the EP due to his expertise in producing radio sessions and live concert broadcasts which captured the energy and spontaneity of bands like Thin Lizzy, Dio and Iron Maiden, coupled with his knowledge of contemporary studio techniques.