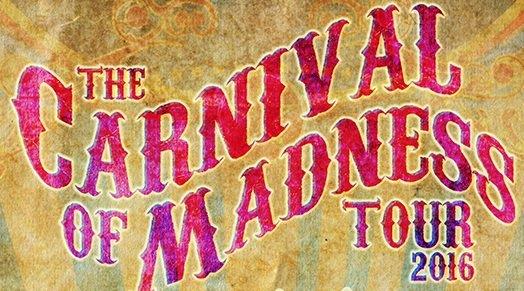 The US touring spectacle, Carnival Of Madness, is set to make its debut appearance on UK shores in 2016, sponsored by Monster Energy. Established in 2010, the tour has seen an array of hard rock talent join the parade in years prior, including Alter Bridge, Papa Roach, Evanescence and In This Moment over in The US, but now it’s The UK’s turn in the spotlight with a fresh batch of bands.

Heading up the Carnival... invasion on the other side of the pond will be Kentucky rockers, Black Stone Cherry, who announce this news as they ready to headline Stage Two at this year’s Download Festival.  Special guests on the run are Shinedown, who will release their fifth studio album via Atlantic Records this Autumn. Rounding out the bill are hot property, Halestorm, and opening the evening are newcomers Highly Suspect.

Black Stone Cherry embrace returning to The UK once again, commenting “We are beyond excited and honoured to return to The UK to headline The UK’s first ever Carnival Of Madness Tour! The UK is a very special place for us, and to be able to return in this way after our first arena tour in 2014 is a testament to where our fans have taken us. We don't take it for granted!  With Highly Suspect, Halestorm, and Shinedown rounding out this incredible bill, you will for sure get your ass kicked like never before! Seriously... we're comin’ for ya! Much love from your favorite Kentucky gentlemen!”

Brent Smith, Shinedown’s frontman, is similarly looking forward to the run, enthusing “A huge hello to all our fans in The UK! We’re excited to be coming back as part of Carnival Of Madness UK 2016.  It’s a tour near and dear to our hearts in The US, and we can’t wait to share the stage with our close mates from Black Stone Cherry, Halestorm, and Highly Suspect! It’s going to be one hell of a show!”

Halestorm are also excited, with frontwoman Lzzy Hale stating; “The Carnival Of Madness tours have always been so much more than just a show. It's an outlet for creativity and energy, something both bands and fans can do together! We've enjoyed being a part of this ride for many years, and are thrilled to be coming over alongside our friends in Shinedown, Highly Suspect, and Black Stone Cherry. Carnival… will continue raising the bar in 2016 in The UK!  Let's make 'rock show' a verb!"

Dates for the run rack up as follows:

Artist fanclub and O2 pre-sales will go live from 9am on June 17th, with a general on sale time of 9am on June 19th.Tickets will be available from box offices, all usual agents, and online from www.livenation.co.uk

A limited amount of VIP ‘First Entry’ tickets will also be available for purchase from CarnivalOfMadness.com on June 19th. The bundle will include one general admission ticket, a Carnival Of Madness 2016 UK tour t-shirt, a commemorative Carnival Of Madness tour laminate, and first entry to the venue.