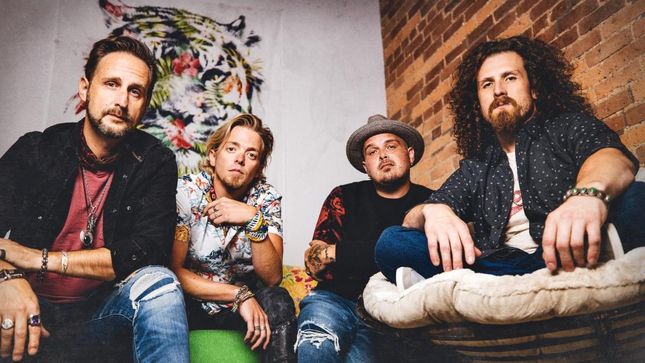 Robertson says, “More than anything, we never want to make the same record twice. Some of our records have similarities, but we have done a good job of not repeating ourselves over the years. This record is more of what you are hinting at [laughing].”

Speaking about their signature sound and style, Robertson explains, “As individuals in the band, we have similar yet uniquely different backgrounds and musical preferences. For me, I’m a weirdo; I listen to everything from Lamb Of God to Bob Marley with everything in between. Four of my favorite artists are Lynyrd Skynyrd, Nirvana, Bob Marley, and Jimi Hendrix. Those four artists couldn’t be more different from each other stylistically. That’s the beauty to me. To me, great music is great music. Genres are just labels for the world because they don’t know what else to do. John is more The Beatles and Led Zeppelin while Jon likes more Motown, Bob Dylan, singer-songwriter stuff. All of these unique influences mold together to make Black Stone Cherry what it is. It’s a cool thing when that happens.”

Black Stone Cherry recently released "In Love With The Pain", the third new song to be taken from their  seventh studio album, The Human Condition, out now via Mascot Label Group. A video for the track, directed by Mike Rodway can be found below.

Says the band: "'In Love With The Pain' is one of the unexpected classics that we didn’t even know we needed! We wrote that song years ago with a couple friends of ours, Scott Lindsey and Stephen Styles, with the intention to pitch it to another artist. However, it kept making its way back into our minds while listening to old demos. So we decided to give it a chance and re-worked it to put our BSC stamp on it, and we are so happy we did! It’s now a favorite!"

"Ringin' In My Head" lyric video: