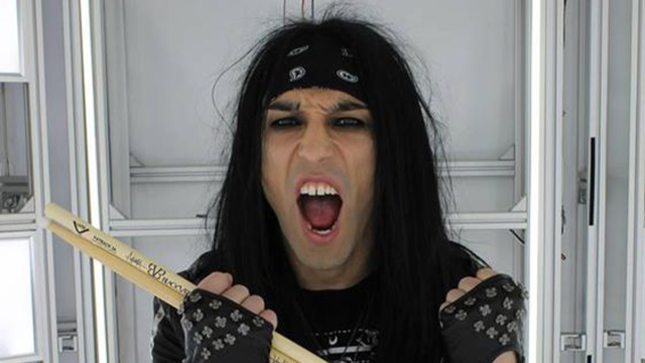 Bad Wolves and former God Forbid guitar player Doc Coyle talks to professionals in the music world and other creative industries in his Ex-Man podcast about the challenges and transitions of leaving monumental ventures. He recently welcomed Black Veil Brides drummer Christian "CC" Coma, and they talk about his early days playing for Silent Civilian, what went wrong with that band and why he quit, the thought process behind Black Veil Brides' image, how he has dealt with finally achieving success in the music industry, what it was like to work with super-producer Bob Rock, and the future of the band.

Black Veil Brides frontman Andy Biersack was recently interviewed by Tyler Sharp of Loudwire. During their chat, Biersack revealed that his band is aiming to re-record their debut album, We Stitch These Wounds, originally released in 2010 on Standby Records; an excerpt follows:

"The plan is to do an entire re-record of our first record. We (initially) recorded it for just a few thousand dollars in a studio that didn’t really have the capacity to do that big of an album. We always felt it wasn’t representative, sonically, of the rest of our catalog. We feel that a lot of the songs on that album are very strong, but have never been given their day in court, so to speak. This is something that was set in motion years ago with Jake (Pitts, guitarist) being the producer of it. And we had started it and I think we finally had figured out how we were gonna be able to do it, and the intention is to not only re-record the record, but to include just about every demo we have from that era, songs that were never released before. We have an entire live DVD that was shot in 2010 in San Diego that was scrapped, that we never released and no one has ever seen the footage from. We’re gonna put that out. We want to include as much of our old costumes and imagery and photos that no one has ever seen, as well as to record at least two or three new songs for the release as well."

"I think the plan is for every song that we have a demo for, which is just about the whole record, to include. Because the original demos were recorded at our apartment that Jake and I shared, and they’re very raw. Jake mixed and mastered them on his laptop computer. There’s just something to them that we’ve always loved. In many ways, they have a much harder edge than the actual album that was released, and we thought it would be fun for people to hear them. There are lyrical differences, there are stylistic differences, there are things that were ultimately changed from when the real record was made, and so we’d like to be able to show those off, as well as all the new material that we have. And I think one of the fun things has been the idea of, as a band we’ve evolved over the years musically. So to be able to go back and write songs from the mindset of 2009 and 2010 Black Veil Brides, I think it’s gonna be fun. We wanna do material that feels like it is the sister song, or the sister-brother so to speak, of a song that was on that album initially."

To read the full interview, visit this location.