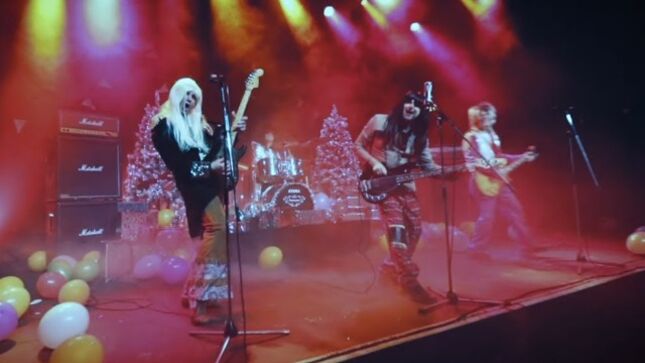 After celebrating the anniversary of the 1995 classic Imaginations From The Other Side, Germany's  metal stars Blind Guardian present a special treat for Xmas as vocalist Hansi Kürsch explains:

"In my opinion, Slade created the ultimate Christmas song with 'Merry Xmas Everybody', a timeless, jolly tune with the perfect dose of cheesiness and almost untouchable in its greatness. Usually, it is prohibited in the Kürsch household to play Christmas songs prior to the Advent season, but as it's mid-November now, and I am just out of the studio doing this cover, I guess I'm breaking a tradition.

What you are about to hear now, is our attempt at paying tribute to the glam rock Santa Clauses Slade, and while the original version is just perfect, its chorus was tailor-made for Blind Guardian as we do understand quite well how to go big. So, why have sausages with potato salad when you can have the Xmas goose? Well, check it out yourselves and Merry Xmas Everybody!"

Get the digital single here.

Blind Guardian released the special 25th anniversary edition of their Imaginations From The Other Side album on December 11th. This edition contains live recordings and other special versions of the Blind Guardian classics featured on the album.

"A brilliant album celebrates its 25th anniversary and it is great to celebrate this in such a bombastic manner. Luckily we filmed our 2016 show in Oberhausen when we performed the entire album live. This is the perfect moment for us to present this masterpiece in so many different ways. An ideal resurrection of precious memories long gone, but not forgotten. This album is made for eternity… I hope. Enjoy", says vocalist Hansi Kürsch.

Imaginations From The Other Side 25th anniversary edition is available in the following formats:

"Born In A Mourning Hall" video: