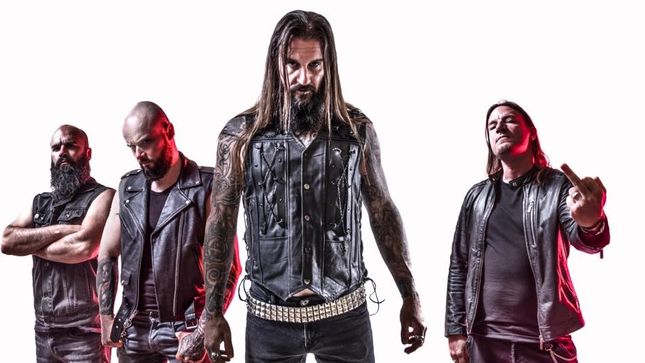 French blackened death metal outfit, Bliss Of Flesh, will release their new album, Tyrant, on October 30 via Listenable Records. Pre-order the album here, and listen to the title track below.

"The cover of this new album is a hand drawing made by the Hungarian artist Balázs Jacsó especially for us," says the band. "Inspired by medieval artists, he tried to imitate the techniques of this area, creating an infinity of details. In the vein of the Etienne de la Boétie’s concept dealing with the voluntary servitude, the artist tried to enlighten the overwhelming power of a tyrant, placing the viewer in the situation of the servant. As you can notice, he has no face. Everyone is free to see the tyrant he has accepted to serve obediently. We’re all someone’s bitch.

“The three circles drawn around the frame symbolize the three elements of the submission: the whip for the oppressive strength, the crown for the symbol of power and the key for the illusional hope of freedom. It’s like the holy trinity. The tyrant also wears broken chains, underlining his past as a servant himself… and the fact that we are most of the time our own tyrant, prisoner of a vicious circle."