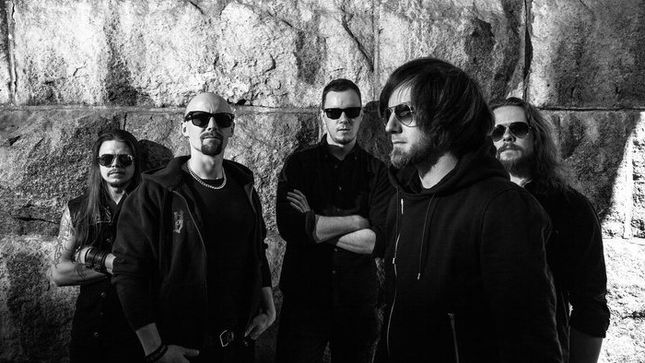 Finnish metallers Bloodred Hourglass are set to release their brand new album, Godsend. The album will be available worldwide June 28th via Out Of Line Music. With three studio albums already under their belt, Godsend showcases the quintet’s exemplary musical chops and melodic ability, establishing them as one of the finest groups working in the modern death metal genre today. To experience Bloodred Hourglass, check out the first video from the new album, “Waves Of Black”, below.

Of Godsend, BRHG’s frontman Jarkko Koukonen commented, “Godsend is so far the best version of a band called Bloodred Hourglass. This album modernizes our sound and the output is fresh and diverse. Expect an album full of harsh attacking metal!”

Godsend was recorded at Soundspiral Audio (Before The Dawn, Gloria Morti) with Juho Raiha and mixed and mastered by Henrik Udd (Bring Me The Horizon, Architects). The album artwork was designed by Tuomas Koivurinne, in cooperation with Miika Saari.

Last year, Bloodred Hourglass visited several different festivals outside Finnish borders and returned to Europe in March-April for a full-length tour with Swedish metallers Evergrey. Additionally, in May the band will be performing in Japan for the first time. Going international doesn’t mean BRHG would forget their home country: during spring and summer the band will perform in various Finnish events and festivals.