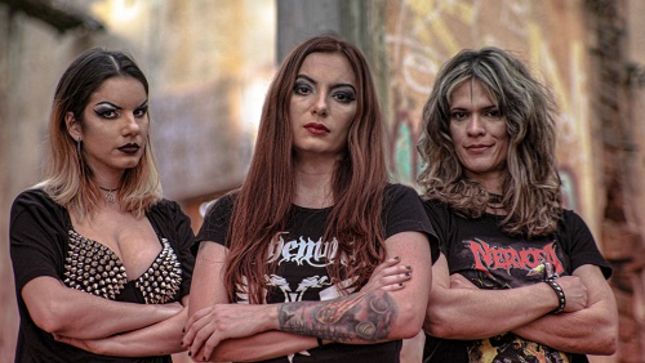 Brazilian metal band, The Damnnation, has released another music video, this time for the track "Parasite". The song is part of their debut EP, entitled Parasite, released on November 10th through the label Xaninho Discos. "Parasite" brings forth a new and extremely heavy sound.

The Parasite EP is currently available on all digital platforms, and will soon be released on CD.

The Damnnation is a female power trio that brings a versatile sound that mixes several strands of extreme metal. Three insane girls making metal without labels, aware and consistent with themes about depression, injustice and politics. With influences from Testament, Megadeth, Nervosa and Kreator.

The band started after guitarist Renata Petrelli (Marie Dolls, ex-Sinaya) and drummer Cynthia Tsai (Little Room, ex-Sinaya) decided to found a new band in early 2019, where they invited Camis Brandão, (Charlotte Killed A Guy), to join forces and make a type of metal flexible and more organic, without clinging to stereotypes, putting all the good influences of the group and making new songs, with a unique sound and a lot of personality. With a focus on other projects, Cynthia and Camis leave the band, which now has Aline Dutchi (bassist) and Leonora Mölka (drummer).