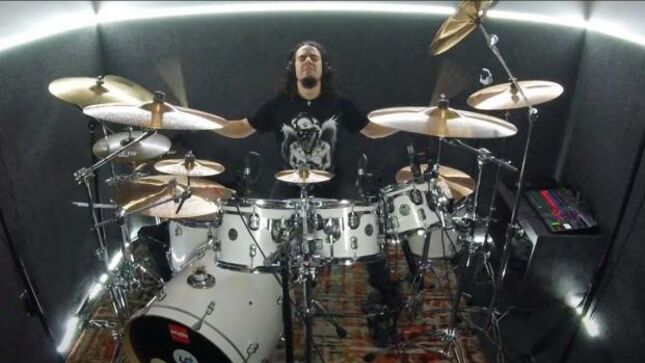 Rage In My Eyes drummer Francis Cassol is sharing his latest playthrough video for "The Core". The track is off their latest 2019 album Ice Cell. The video showcases the velocity and technicality Cassol applies in this high speed fist-pumping classic metal sounding song.

Rage In My Eyes have a new video out for "Winter Dream", taken from the 2019 album Ice Cell. The video was part of the band’s participation in the Roadie Crew Online Festival - 9º Edição. Watch below:

Ice Cell is the first album by the band under their current name; the group also released three albums under Scelerata. They originally formed in 2002 and with the recent name change has altered their sound to incorporate traditional music from South America with prog and heavy metal. Along with the cultural infusion, Rage In My Eyes brings in accordion for a truly one of a kind listening experience.

Vocalist Jonathas Pozo explains the conception of “Winter Dream”: “We had already chosen Winter Dream as the opening track, which led us to address the lyric theme in order to present a little of the icy scenery of Ice Cell, imagining the aspect of our biological and chemical origin under the influence of the morphic field theory of Rupert Sheldrake, that is, considering the presence of the past as an important constituent of our subsequent choices, as humanity. At the same time bringing in this scenario landscapes that are common in southern Brazil, such as fog, frost, and sometimes even snow. It was also chosen because it is a more cadenced and heavy song (although also extremely technical and quite proggy), thus contrasting with the usual melodic and fast opening tracks in power metal albums, representing more accurately the “musical humor” of the band.”

"Hole In The Shell" live video: