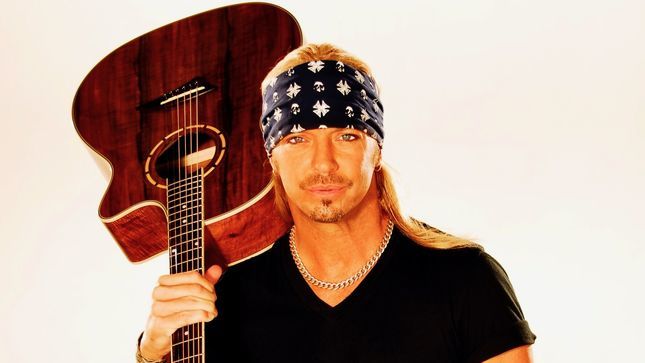 Today, November 11, is Veterans Day in the US, and Bret Michaels has released a video message honouring military veterans. Watch below:

Bret Michaels, the son of a Navy Veteran, visited Luke Air Force Base to show his continued support for the men and women of the country’s military and their families and to celebrate the opening of the new DOCS facility directly on base, reports Look To The Stars.

Coming from a long line of veterans, Michaels, an ardent lifelong supporter of our nation’s military, always makes it a point during his live shows to bring veterans on the stage to honor them in arenas and stadiums across the country. During his visit to Luke AFB Michaels met hundreds of service members and their families, who also received a copy of his bestselling book, Bret Michaels: Auto-Scrap-Ography / My Life in Pictures & Stories.

“Every once in a while you come to the absolute real deal. The guy whose family is in the military, the guy who will travel far and wide around the world in to dangerous places and otherwise to help support the military and Bret is that guy,” said Dr. Larry Caplin of DOCS.

Michaels has been to Iraq, Afghanistan, Kuwait and Abu Dhabi to visit with and perform for the troops, while also raising and donating hundreds of thousands of dollars for military charities and hospitals through his Life Rocks Foundation. The artist is looking forward to continuing to help DOCS bring state-of-the-art health care to bases across the country.

“What an absolute honor it is to support our military and the DOCS team,” said Michaels. “As the son of a veteran, there are not enough words to say thank you to our service members and their families for their service and the freedoms that it gives us. Helping DOCS open their amazing state of the art facility is just one way that we can support our service members and their families.”