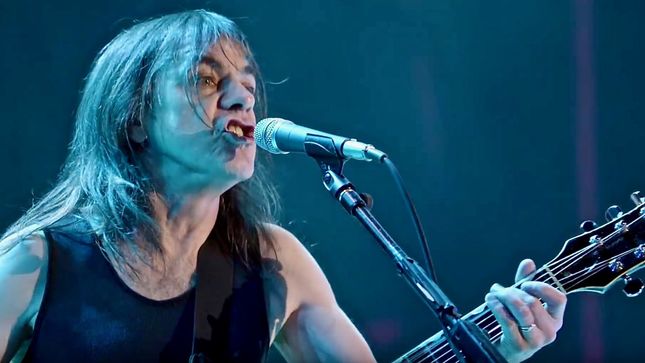 AC/DC guitarist and co-founder Malcolm Young died peacefully on Saturday, November 18th at age 64 with his family by his bedside. AC/DC singer Brian Johnson has posted the following at his official website:

"I am saddened by the passing of my friend Malcolm Young, I can’t believe he’s gone. We had such great times on the road.

"I was always aware that he was a genius on guitar, his riffs have become legend, as has he.

"I send out my love and sympathy to his wife Linda, his children Kara and Ross, and Angus, who will all be devastated…. as we all are.

"He has left a legacy that I don’t think many can match. He never liked the celebrity side of fame, he was too humble for that. He was the man who created AC/DC because he said “there was no rock 'n' roll” out there.

"I am proud to have known him and call him a friend, and I’m going to miss him so much. I salute you, Malcolm Young."

"Today it is with deep heartfelt sadness that AC/DC has to announce the passing of Malcolm Young. Malcolm, along with Angus, was the founder and creator of AC/DC. With enormous dedication and commitment, he was the driving force behind the band. As a guitarist, songwriter and visionary, he was a perfectionist and a unique man. He always stuck to his guns and did and said exactly what he wanted. He took great pride in all that he endeavored. His loyalty to the fans was unsurpassed."

"As his brother, it is hard to express in words what he has meant to me during my life, the bond we had was unique and very special. He leaves behind an enormous legacy that will live on forever."