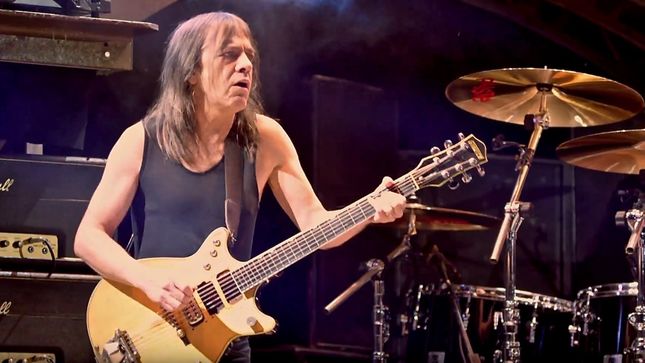 Singer Brian Johnson has released a tribute via Rolling Stone to late bandmate Malcolm Young, who died peacefully on Saturday, November 18th at age 64 after years of suffering with dementia. An excerpt follows:

"Malcolm was a catalyst. It was Malcolm that got ahold of Angus and said, "Just go fucking crazy [on guitar]." Malcolm taught everybody in the band how to be in a band. One of the super-fans came to one of the gigs and the security just wouldn't let him in. We were in Germany and he had hitchhiked there, so Malcolm just pulled out 500 pounds and said, "I am sorry I can't get you in, but why don't you fly home?" He was just a sweetheart.

"I'll always remember my little audition for AC/DC in 1980. They had asked singers to come in and do a couple of songs. The smallest guy in the room stood up and walked towards me. Pulled out a bottle of Newcastle Brown Ale, because that is where I am from, and said, "There you go, mate, just make yourself at home." It was Malcolm."

Malcolm Young will be farewelled by family and friends at St Mary’s Cathedral in Sydney, Australia on Tuesday, November 28th, reports NEWS.com.au.

It is believed Malcolm's family, who have always shunned the public spotlight, has requested the funeral not be broadcast so they can mourn the rocker privately.

Young’s funeral will be held at 11am on the same day as the annual celebration of Australian music, the ARIA Awards. The funeral is expected to be attended by the extended Young family, who had to farewell Malcolm’s older brother George, the co-founder of the Easybeats, only last month.