BRIAN JOHNSON Reportedly Confirms He Is On New AC/DC Album 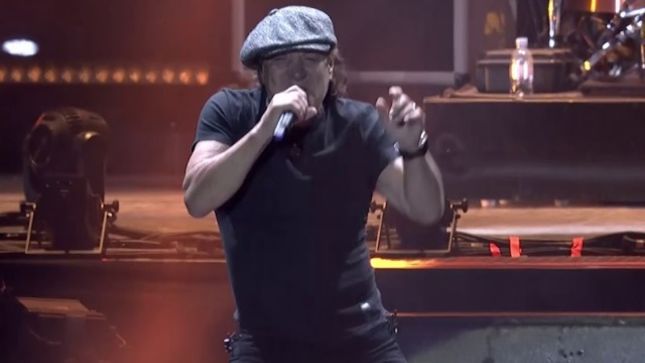 Back in August 2018, news came down recently that AC/DC, along with vocalist Brian Johnson, have been working at Bryan Adams' Warehouse Studio in Vancouver with engineer Mike Fraser - who mixed and engineered the band's last three albums (Stiff Upper Lip, Black Ice and Rock Or Bust).

As no official statement has been made by the band since, news of Johnson's return up to this point has been regarded as a rumour. Johnson has now (reportedly) confirmed he is back with AC/DC according to a post by the American band Terrorizer, who ran into Johnson at an airport in Sarasota, FL.

From Terrorizer: "We ran into Brian Johnson from ACDC at the airport today after the flight home and we asked him about the rumors of him being on the new ACDC album and he said "Yes" and that he is " Sick of denying it". So that was a cool surprise ending to the tour."

In 2016, Brian Johnson was forced to step down as AC/DC’s frontman after doctors told him to quit or go deaf. He was replaced on the road by Guns N' Roses singer Axl Rose. Malcolm Young died in November 2017 after suffering from dementia for several years.

AC/DC ’s upcoming studio album will include the late Malcolm Young playing rhythm guitar on all tracks. Angus Young decided to select the best tracks from those recordings that Malcolm played on and headed back to the studio to record and mix them with fellow bandmates Phil Rudd, Cliff Williams and Brian Johnson.

Stay tuned for further updates from the AC/DC camp.