BRUCE KULICK Talks 2003 Near Death Experience - "Being Shot Is A Very Bizarre Experience; I Was Very Lucky" 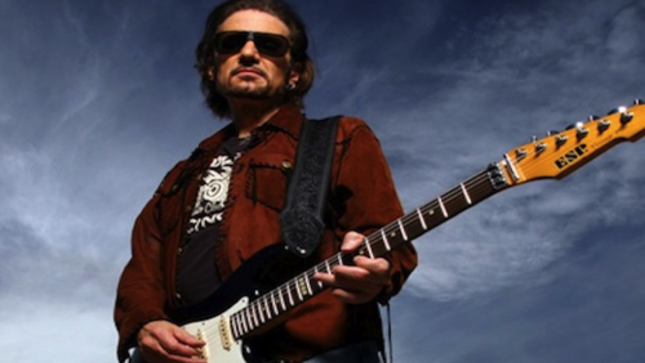 Journalist Lucas H. Gordon recently caught up with guitarist Bruce Kulick (Grand Funk Railroad, ex-KISS), who discusses his near death experience in October 2003 when he was shot on the street in Los Angeles. Kulick also talks about current KISS guitarist Tommy Thayer and his own experience with the band.


In an extensive new interview with music writer Joel Gausten discussed various topics including the recent release of the Got To Get Back EP with his very first band KKB, the new vinyl version of his 2010 solo album BK3, and the 30th anniversary of KISS' Asylum album. Following is an excerpt from the  in-depth story:

Being a team player served Kulick well way back in 1984, when he replaced Mark St. John to become the fourth lead guitarist in KISS. The following year, he made his official recorded debut as a member of the band on the Asylum album. With that record hitting its 30th anniversary this September, Kulick looks back at the Asylum experience with fondness.

“First of all, I got to record at Electric Lady [Studios], which is a real dream because of Jimi Hendrix being such a favorite of mine,” he says, “[He's] still actually my favorite guitarist, and then Eric Clapton and Jeff Beck. To be in the studio that [Hendrix] built was really mind-blowing. It's down in Greenwich Village, which was still kind of happening in the '80s.”

Of course, Kulick wasn't a complete stranger to the KISS camp before becoming a member. His brother, Bob – a renowned session player whose credits include everyone from Lou Reed to W.A.S.P. – had a long history with the band dating back to 1973, when he first auditioned for the spot taken by original KISS guitarist Ace Frehley. Later, he played on Paul Stanley's 1978 solo album, co-wrote the song “Naked City” for KISS' 1980 Unmasked album and contributed guitar session work to the KISS releases Alive II (1977) and Killers (1982). Despite this longstanding family connection, Kulick didn't gain true insight into the inner workings of KISS until he landed the job and started working alongside Stanley and Gene Simmons, who both co-produced Asylum.

“It was kind of funny; I didn't really know how they worked together as a band,” he recalls. “I had a little bit of a taste of working with Paul in the studio, because I did some of the ghost guitar work on (1984's) Animalize. I never actually worked in the studio with Gene (before Asylum). I saw them one time (in the studio) when they were doing Creatures of the Night, because my brother and I visited. My job as the lead guitarist was, look, I knew they were the principal creators of KISS. Not to take anything away from Ace and  Peter (Criss), but you know that Gene and Paul were always really the driving forces in the band. They really had a vision for a Rock band that could be huge, and they succeeded. I was just going to basically do my job... I was just that guy who could interpret what they wanted and then be able to create and lay it down there. I didn't go in really with any expectations except for doing the best job I could.”

“Gene would work any day – no matter (if it was) a holiday or weekend – and Paul would want the weekend off,” he says. “I remember one time, I think I worked 22, 25 days in a row in the studio, being passed back and forth between the two of them! It truly was exciting for me.

“Paul was a little more methodical about how he wanted to work,” he continues. “Like on 'Tears Are Falling', I love the solo that I came up with for it. Some of it was definitely from some ideas from my music vocabulary, but some of it was very clearly his melodic approach to what a lead guitar could do.”

Asylum's arrival on record store shelves coincided with the height of Glam Metal Mania in the United States. Although KISS' fashion sense circa 1985 was indicative of the era, the band's gradual transition from Clown White makeup to Aqua Net Pink hairspray was still a shock to many of the band's original fans. The band's willingness to embrace then-current trends was reflected by the record's cover – a hyper-Glam design created by longtime KISS art director Dennis Woloch that is said to have been inspired by the imagery used for The Motels' Shock album.

“I was concerned about the cover, even though I didn't have a problem with it,” Kulick admits. “That era had a lot of neon colors in it, but for a KISS album, it was a little odd. At least this time, everybody knew who was playing on a Kiss album, whereas I toured with them for (Animalize) and nobody was sure who they were seeing. At least I got my foot in the door of, 'Now the real lead guitar player in the band is Bruce Kulick.'”

Three decades after Asylum's release, the album remains a favorite among members of the Kiss Army.

“I can't tell you how many Asylum records I've signed,” Kulick says. “Of course, songs like 'Tears Are Falling', 'Who Wants To Be Lonely' and 'King Of The Mountain' are really, really cool tracks from that album that I'm real proud to have been a part of.”