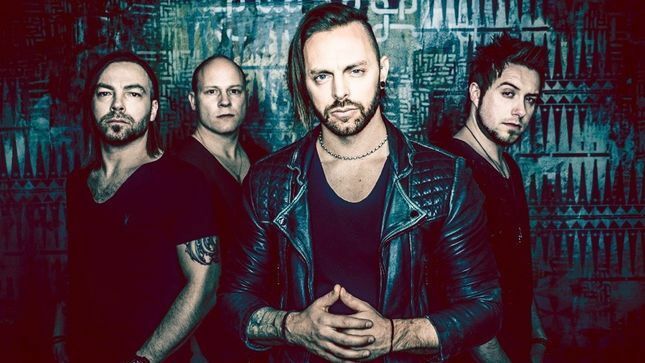 In a new Kerrang! feature, Bullet For My Valentine frontman Matt Tuck looks back on some of the band's music and offered his honest opinion of the work now. Following is an excerpt from the piece.

Tuck: "This song got a lot of radio love when it first came out, and it got to something like 21 in the UK charts, which blew our minds. We’d had videos on TV before, but to hear our music for the first time on British radio was amazing. It was a similar feeling heading out to the States a year later and hearing 'Tears Don’t Fall' on specialist rock stations. I remember writing those songs in my friend’s bedroom, so to then have them on the radio was a massive head-trip."

Tuck: "That whole album could’ve been better in many ways. Partly because I needed to go to speech therapy and get a tonsillectomy, but we also tried too hard to show everyone what we were about as far as metal credibility goes, whereas we should’ve just gone down the path we wanted to. Those songs would’ve been better if we’d have done what we did on The Poison and written from the heart."

Tuck: "It’s got an awesome, feel-good factor and it’s garnered a magical response from fans. It’s got a more anthemic vibe than anything we’ve done before, and hearing the chorus sung back is a beautiful thing. It’s a freight train of a track."

In September 2020, Doc Coyle welcomed Bullet For My Valentine lead guitarist Michael "Padge" Paget to the The Ex-Man podcast. In the interview below, Padge talks about how BFMV has maintained so much consistency over the years, his philosophy of personal humility despite great success and fame, how the UK metal scene evolved out of obscurity with breakout artists like BFMV, what is was like working with producer Colin Richardson and having massive early success, the pain of losing band members, the downside of success and how money and excess almost destroyed the band, and how the pandemic has affected the UK and shaped their prospects to start playing live.

On the band's new studio album, which is currently in the works:

"It's heavy as fuck. It's the heaviest Bullet stuff you've ever heard, which is cool. Everyone's vibing. It's just we need to get out of this (lockdown) situation we're in so that music carries on and we can put on shows again. Same as everybody else that's in the same situation."

The clip below features Bullet For My Valentine playing at Resurrection Fest on July 9th, 2016 in Viveiro, Spain. The pro-shot footage was uploaded by festival organizers.