BULLETBOYS Guitarist MICK SWEDA, Drummer JIMMY D'ANDA Call It Quits - "Once It Gets To A Point Where It's Poisonous, You Can't Have It In Your Life" 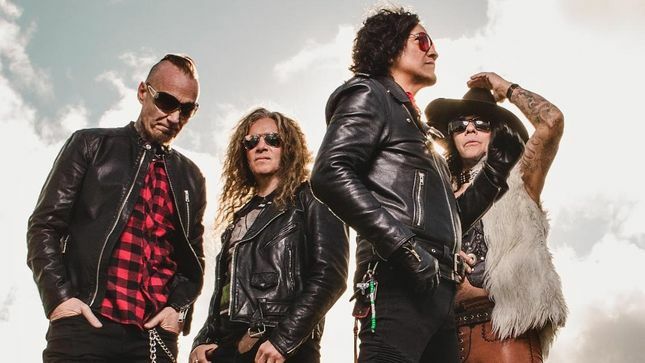 Sweda shared the news via Facebook live. Check out the clip below.

Following is a portion of Sweda's statement:

"In the past, I know it's been brought up that anybody who isn't in BulletBoys has quit on the fans, and that may or may not be something you'll hear in interviews or whatever. Trust me, it has nothing to do with quitting on fans and everything to do with just not wanting to travel down a path that is fraught with strife and distrust and bitterness and everything else. It's really, at this point in our lives, imperative - at least for me; I'll speak for myself here - that I just remove all forms of toxicity. I'm sure all of you understand it just can't be a part of my life anymore. The fact that we were all original and having some good shows and having a great time playing the shows - there's no doubt about that; I had a wonderful time and I was looking forward to doing it all of 2022 - but once it gets to a point where it's poisonous, you can't have it in your life.

I'm grateful that everybody understands, and I apologize to you. I was really looking forward to this being a nice run, being a nice year and finding a way to make our way through it. But that is not to be."

In August 2020, Marq Torien guested on the 80’s Glam Metalcast and talked about the reunion of the original line-up and new music from the band.

On the new BulletBoys material

Torien: "I've been doing a lot of writing and recording. Trying to rise to the occasion and keep a good perspective on everything. It's going amazing in the studio, but it's not easy to do it under quarantine. You ever seen Fight Club? Our band is kinda like Fight Club, we don't talk about Fight Club! I will share that there is a lot of stuff being thrown around musically. We have a big surprise coming for people in the next few months. We've been cooking some stuff in the BulletBoys kitchen. It's sounding amazing. It's going to be produced by some of the family that worked on our first record. Not to give away too much. When the four of us get together, it just has that sound man. We are working on a new video too. Hopefully it will be out by the end of the summer."

On reuniting the original line up

Torien: "It's better than the old days because we've have grown as people and as musicians. We definitely have the chemistry, it never left. It was really about finding a way to be loving each other in the now. Not focusing on things that did or didn't happen in the past."