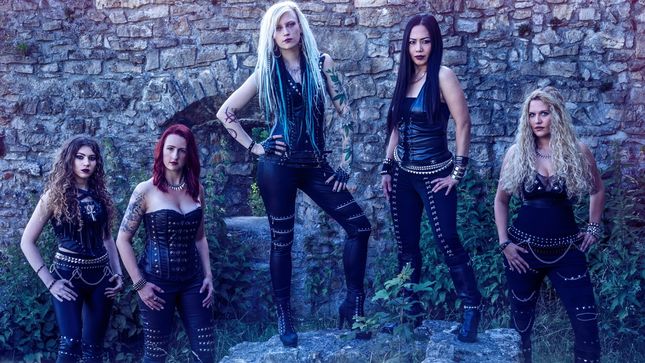 Today, the band presents the first track by track trailer for the new album. Find out about the idea behind the songs "The Witch Circle", "Executed",  "Lords Of War" and "Open Your Mind", below:

The group recently released another musical taster in the form of the music video for "Hexenhammer".

States the band, "The filming of the 'Hexenhammer' video was an exciting new experience for the band. Our second video dives into the story of Malleus Maleficarum, written by the discredited Catholic clergyman Heinrich Kramer, to legitimate his cruel deeds against woman in the 15th century. The title track stands for the album, it is melodic and heavy and reflects the sound of the band in a perfect way! We hope you will enjoy the video, which opens up a new authentic chapter for the band!

"We wanna thank the Witchcraft museum in Gränichen/Switzerland and its founder and director Miss Wicca Meier-Spring and her team for the support on this large project. Also we wanna thank the Operahouse of Zurich for the costumes and the props. Ancient recordings and editing by Michael Buzek - cheers to the whole team for making this amazing venture possible!"

The cover artwork for the band's second studio album was created by acclaimed artist Gyula from Hungary, who has also created artwork for Destruction, Annihilator, and many more.

The forthcoming record was produced in the Little Creek Studio by the same team as its predecessor: V.O. Pulver (Pro-Pain, Destruction) and Destruction legend Schmier, who helped and advised as a close friend of the band. The result is a truly brilliant heavy metal album, which will take away the breath of headbangers worldwide, and of course make people bang their heads!