BURTON C. BELL On His Departure From FEAR FACTORY - "It's Been On My Mind For A While; I Just Lost My Love For It" 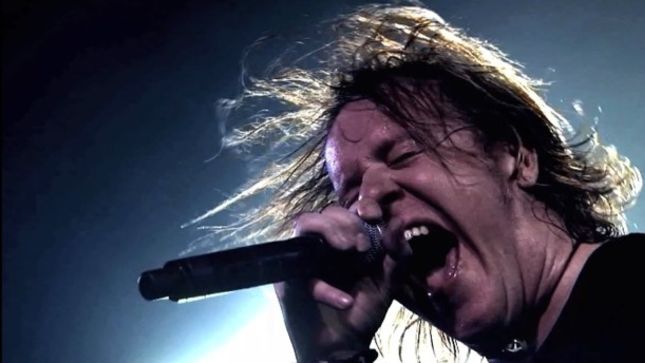 Vocalist Burton C. Bell recently announced his decision to leave Fear Factory, saying that the last few years of the band being caught up and immobilized by legal battles "profoundly agonizing, with these (band) members bleeding my passion with depraved deceit." In aninterview that followed, guitarist Dino Cazares made it clear the door was open for Bell if he wanted to return, but in a new interview with Kerrang!, Bell made it clear he is done with Fear Factory and is focusing in his band Ascension Of The Watchers.

K: It came as a shock from the blue for fans – and even Dino Cazares, if reports are to be believed. Has walking away from Fear Factory been on your mind for some time?

Bell: "It’s been on my mind for a while. These lawsuits just drained me. The egos. The greed. Not just from band members, but from the attorneys involved. I just lost my love for it. I’ve been working (intensely) on The Watchers for the last two years. Working with people who I can trust and who I love, and with whom I have grown to find a niche musically definitely pushed me towards it. There are a lot of surprises. I’ve had a lot of surprises for the last four years. With Fear Factory, it’s just constantly been like 'What?!' You can only take so much. I felt like 30 years was a good run. Those albums I’ve done with Fear Factory will always be out there. I’ll always be part of that. I just felt like it was time to move forward."

K: What are your feelings when looking back over the last 31 years with that band? Have these last few years soured them permanently?

Bell: "I’m proud of my legacy. We achieved great things. We made incredible music and left an indelible mark on the music industry and on fans around the globe. We’ve had peaks on top of mountains with our highs and we’ve plumbed the deepest trenches with our lows. There just comes a point where you have to move forward to do more great things with a different band…"

Bell posted the following statement announcing his departure at his official website.

"I consider myself a private person, preferring to keep my personal business to myself and trusted loved ones. I make my public statements with thoughtful intent, never deviating from the truth, in spite of the consistent series of dishonest representations and unfounded accusations from past and present band members; a toxic drama I choose to not be part of.

"The past several years have been profoundly agonizing, with these members bleeding my passion with depraved deceit. As a direct consequence of their greed, these three have dragged me through the unjust, judicial system, resulting in the legal attrition that has financially crippled me. In the end, these three members have taken possession of my principal livelihood. However, they will never take my 30-year legacy as the beating heart of the machine. A legacy that no other member, past or present, can ever claim.

"So, it is after considerable, contemplative soul searching that I have come to the realization that I cannot align myself with someone whom I do not trust, nor respect. Therefore, I am announcing to my fans my departure from Fear Factory, to focus all my energy and attention toward the continuing success for Ascension Of The Watchers, and all my future endeavors.

"I am very proud of the Ascension Of The Watchers’ latest album, Apocrypha. The writing and recording process for Apocrypha has been a truly cathartic and artistic journey of exploration and growth for me. Reigniting my passions for my writing, allowing my music to flourish, enabling my soul to soar, saving me from the real hell that engulfed a significant part of my daily life. Collaborating with talented, kindred spirits has truly created an inspirational environment of support and mutual respect, a spirit I have missed for a very long time.

"I would like to thank all of my fans for their continued support throughout my career. I am very proud of my achievements, but, it is time for me to move forward. Now I look to the future with open eyes, open mind and open heart, as my artistic path strives for even greater success in music, writing and my art. It’s true, “the end is always the beginning”. The soul is free from the machine."

Ascension Of The Watchers will release their new album, Apocrypha, on October 9 via Dissonance Productions. The recording will be available on CD, two limited vinyl formats and through all major digital outlets. Pre-order on CD and vinyl here. Pre-save on all streaming platforms here.