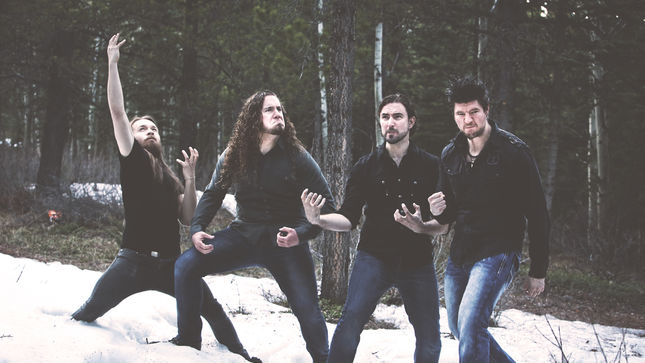 The hard hitting force of Calgary, Alberta's progressive power metal quartet, Viathyn, is being unleashed to the masses with the band's teaser medley for their upcoming album, Cynosure, due out on October 7th.

"This new album Cynosure is a culmination of several years of hard work following the release of our debut album The Peregrine Way in 2010. We are very proud of the end result and extremely excited to share this new material with everyone! We've chosen a handful of passages that we feel are representative of the diversity and performances on the album and put them together into a preview medley to give our listeners a sneak peek." comments guitarist Jacob Wright.

The Making Of Cynosure Mini-Documentary:

With Viathyn's 2010 The Peregrine Way debut album praised for its innovative song-writing and fresh comparison to today's power metal, it was only a matter of time for guitarist Jacob Wright to launch into song-writing mode and compose a majority of the material that would be recorded for this second full-length.

Even through hindrances such as studio closings, computer crashes, losing a jam space, and a flood, Viathyn was able to record their second album between August 2012 and February 2014. With the addition of 7-string guitars, some growl vocals, and an evolving influence, Cynosure's songs are faster, more technical, and heavier, while maintaining a constant melodic and progressive presence.

Viathyn was formed in 2006 in Calgary, Alberta when brothers Tomislav and Dave Crnkovic (on guitar and drums respectively) joined forces with lead guitarist Jacob Wright. Having come from various influences such as thrash, melo-death, and power metal, they wrote a handful of early demo tracks to settle on an overall sound for the group. In 2008, they recorded the Demagogue EP in order to attract a permanent vocalist and bassist. Alex Kot joined on bass in 2009, and brought with him a unique playing style by using an 8-string NS stick. Tomislav took up vocal duties, and the line-up was complete. Viathyn started playing live shows and has supported bands such as Stratovarius, Manegarm, Incantation, Rotten Sound, Into Eternity, and Skeletonwitch.

Quick fact on the band name: Playing off the word 'Leviathan', the guys settled on ‘Viathyn’, which has no actual definition in the English language, but when referring to the band can be taken to mean ‘progressive, melodic, grandiose, innovative and emotional’.