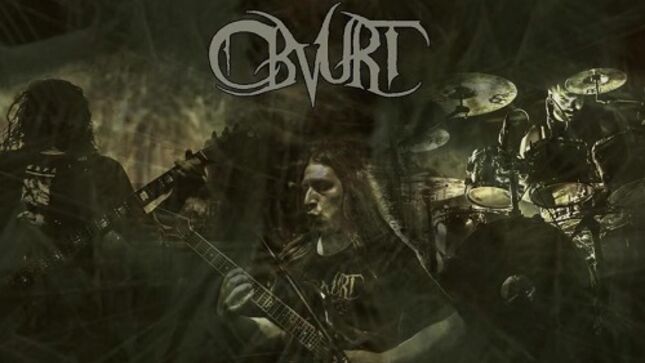 Obvurt, a death metal three-piece from Quebec, Canada will release their debut EP, The Beginning, on March 31 via Brutal Mind. A lyric video for the song "The First Light" was just issued.

Initially, Obvurt was a solo project created by Philippe Drouin. In 2016 he was the victim of a car accident, which injured his right wrist and prevented him from playing the guitar. Despite undergoing multiple medical operations, Philippe was not able to get his dexterity back. Even when facing adversity, he refused to give up on himself or on the guitar skills he had been perfecting for 15 years.

In 2018, he decided to buy a left-handed guitar, despite being right handed. With the help of Michael Angelo Batio, and because he kept practicing, Phil was able to come up with his very first songs.

Obvurt was formed in 2020 with Philippe Drouin (Unbreakable Hatred, Vitiated), Olivier Pinard (Cattle Decapitation, Cryptopsy) and Samuel Santiago (Agony, Gorod). Philippe was the one who came up with the name Obvurt, which relates to his particular turn of fate. Obvurt stands for Obvert (to oppose) and Hurt (to wound). In August 2020 the band recorded their first EP, The Beginning, with Christian Donaldson (Cryptopsy) at The Grid Productions.

A quarantine playthrough video for the track "Obverted", featuring a guest guitar solo from Michael Angelo Batio, was previously released.

The Beginning artwork and tracklisting: